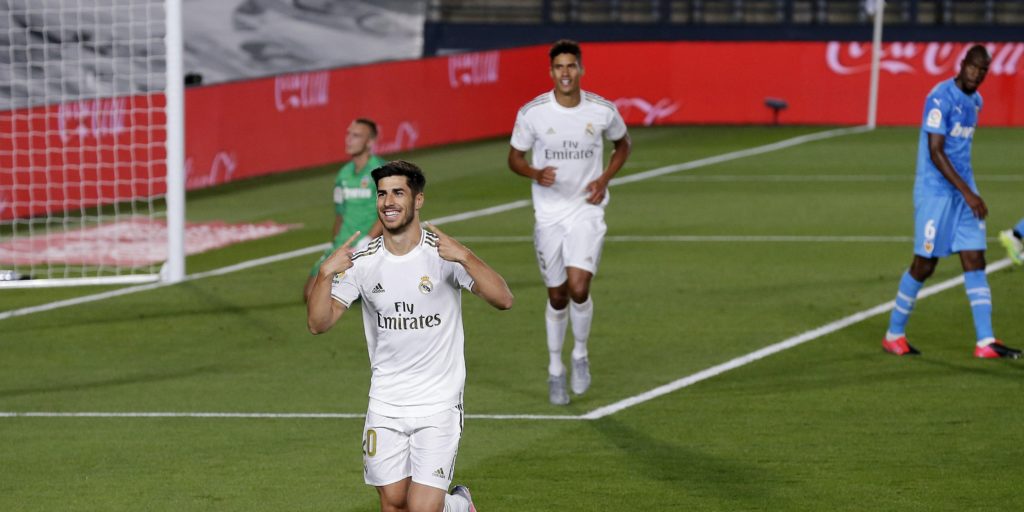 Marco Asensio scored with his first touch in almost a year as Real Madrid’s 3-0 win over Valencia closed the gap on LaLiga leaders Barcelona to two points.

The Spain international ruptured the anterior cruciate ligaments in his left leg during a friendly with Arsenal last July and marked his comeback, as a 74th-minute substitute, with a stylish volley seconds after taking the field.

It was a cathartic moment for Asensio, who smiled widely as he ran to celebrate, and a joyous one for his team-mates at Estadio Alfredo di Stefano.

In the circumstances Karim Benzema will be content to play second fiddle, despite scoring the crucial opener after an hour’s play and adding a second late on.

Real dominated the ball in the opening exchanges, with Benzema, Toni Kroos and Eden Hazard all to the fore.

The latter got shots away but could not get the better of Jasper Cillessen. Valencia conjured a meaningful riposte of their own on the break, Rodrigo collecting Maxi Gomez’s clever pass and slotting his effort against the post.

Rodrigo went one better in the 22nd minute, finding the back of the net with a neat touch from Carlos Soler’s pass only for VAR to step in and determine Gomez had been both active and off-side.

Real reclaimed the initiative at the start of the second half, Daniel Carvajal bombing forward at will and Sergio Ramos finding himself closing in on goal, only for a poor touch to let him down.

In the end it took an error from Valencia substitute Kevin Gameiro to open up the game, a wayward ball gifting Hazard the chance to counter at speed down the left.

The Belgian produced a neat give and go before touching the ball in Benzema’s path and the centre forward finished first time.

Asensio’s long road back ended when he replaced Federico Valverde in the 74th minute and he had been involved just a matter of moments when he lashed home Ferland Mendy’s cross.

Benzema finished things off with a powerful strike but Valencia’s travails were not yet over, substitute Kang-in Lee sent off in the closing minutes for hacking at Ramos.