Neal Maupay apologises for role in injury to Bernd Leno 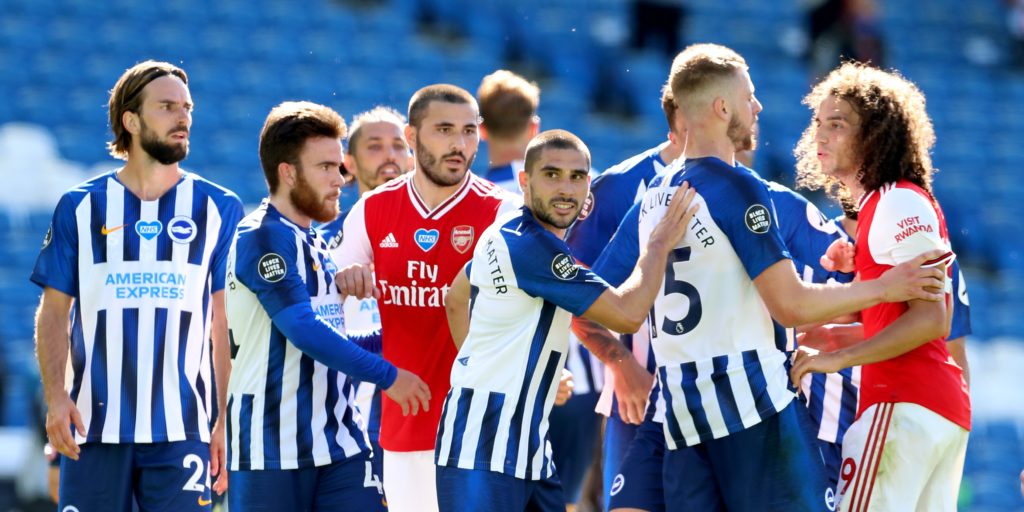 Leno faces an extended spell on the sidelines.

Brighton forward Neal Maupay apologised for his role in Bernd Leno’s injury but claimed some of Arsenal’s players “need to learn humility” after he grabbed a last-gasp winner at the Amex Stadium.

Martinez was only on the field because first-choice keeper Leno was stretchered off in the first half with a serious-looking knee problem following a nudge from Maupay.

Arsenal boss Mikel Arteta said the true extent of the Germany international’s injury would not be known until at least Sunday.

Maupay expressed remorse for the incident, although he was angered by the behaviour of unnamed members of the opposition.

“At half-time, I went to Arteta to apologise because I never meant to injure their keeper,” Maupay told BT Sport 1.

“I just jumped to get the ball maybe and I think he twisted his knee, I never meant to hurt him.

“I am really sorry. I apologise again and I wish him a speedy recovery.”

“They have been talking a lot first half, second half when they were 1-0 up. They got what they deserved.”

Albion’s win completed a first league double over the Gunners to push them away from the bottom three and dent their opponents’ pursuit of European qualification.

Maupay, who also claimed the winner at the Emirates Stadium in early December, struck after Seagulls captain Lewis Dunk scrambled home an equaliser to cancel out Nicolas Pepe’s superb opener.

“I believe that no player has the intention to hurt anybody and I believe in this case exactly the same. It was unfortunate,” Arteta said at his post-match press conference.

“It’s a knee injury – a hyperextension of the knee – and we have to assess the damage.

Tempers were running high at full-time, with Arsenal midfielder Matteo Guendouzi appearing to clash with Maupay.

The Gunners had enjoyed the better of the play and squandered a number of opportunities, while Bukayo Saka struck the crossbar early on.

Arteta, whose side were beaten 3-0 at Manchester City in midweek, said he was unaware of the Guendouzi incident and felt his team could only blame themselves for another disappointing defeat.

“I haven’t seen the reaction. (There were) a lot of players talking and getting together but I didn’t know what happened,” said the Spaniard.

“The frustration was that we have thrown the game away.

“We haven’t competed like you have to compete in the Premier League. I think it was all our fault.”

Potter admitted his side were perhaps fortunate to secure all three points but was delighted to end a run of nine league matches without success dating back to December 28.

“It feels amazing, a big three points for us,” he said.

“Certainly coming from a goal down in the Premier League isn’t easy to do without a crowd here to push us on. The boys found something in them, I am so proud of them, it’s an incredible effort.

“We know where we are at, we know the margins are small in the Premier League and you have to turn them in your favour and that’s what we have tried to do.

“Regardless of the table we have to keep fighting and that’s what I think we saw today.”