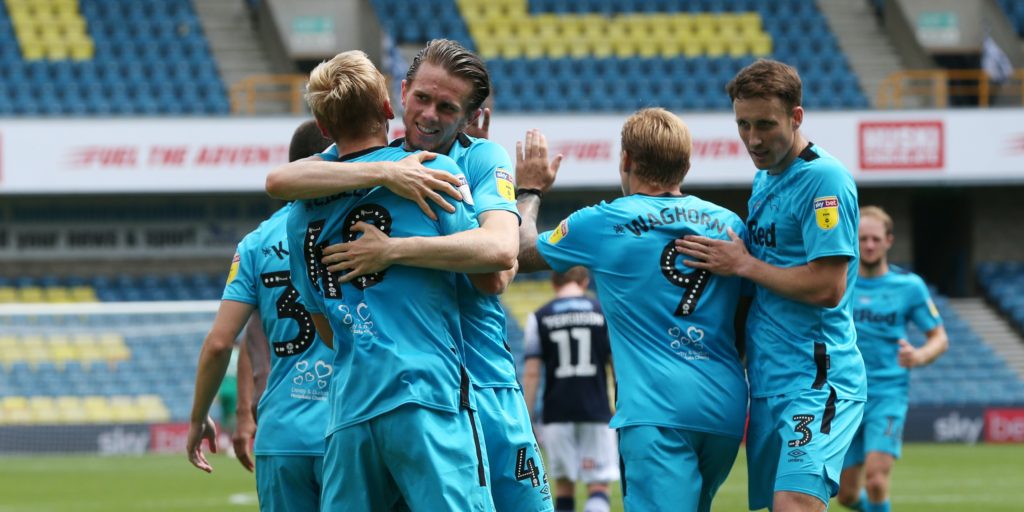 Matt Smith opened the scoring for the Lions but three goals from Sibley turned the game on its head.

Eighteen-year-old Sibley, making only the second league start of his career, scored a magnificent solo goal to cancel out Matt Smith’s first-half opener.

The Rams academy product slotted home a second with 20 minutes to play and wrapped up the points in closing stages.

Sibley is the youngest player to score a league hat-trick in the top four tiers since Ryan Sessegnon did so in November 2017.

Derby dominated possession from the first whistle with Wayne Rooney dictating play from deep and Sibley finding pockets of space.

When Millwall took the lead on 15 minutes, it was with the game’s first shot.

Jed and Murray Wallace combined to drive a counter-attack into the final third, before Shane Ferguson delivered a pinpoint cross which Smith powered past Ben Hamer.

The visitors improved after going behind, Sibley stinging Bartosz Bialkowski’s palms from distance and Martyn Waghorn clipping the bar from a free-kick.

Phillip Cocu’s men got their reward midway through the half as Sibley twisted past two defenders and held off a third before firing high into the net.

Just a few minutes later the teenager almost repeated the trick, leaving two Millwall defenders on the floor, but Bialkowski pushed his shot away.

The home side continued to threaten on the break, Mahlon Romeo stinging Hamer’s palms with a low effort and hitting the side-netting with another.

Hamer had to be at his very best moments before half-time, when Ryan Leonard burst past Andre Wisdom and forced a fine save one-on-one.

Shortly after half-time Millwall had another golden chance to take the lead as Smith was left totally unmarked from a throw-in but his attempted lob sailed well over the bar.

The game looked as if it was drifting towards a draw until Sibley provided another moment of magic, latching onto a cushioned pass from Waghorn before finishing coolly past Bialkowski.

Millwall, who piped in crowd noises over the speaker systems to try and replicate the Den’s usually raucous atmosphere, never looked like getting back in the game.

As they pushed forward ever more desperately, Sibley took advantage of the space left in behind to complete his treble.

Jon Dadi Bodvarsson pulled one back for the home side in stoppage time, but it was too little too late.

Derby sit 12th after the perfect restart to their season while Millwall slipped two places to 10th.