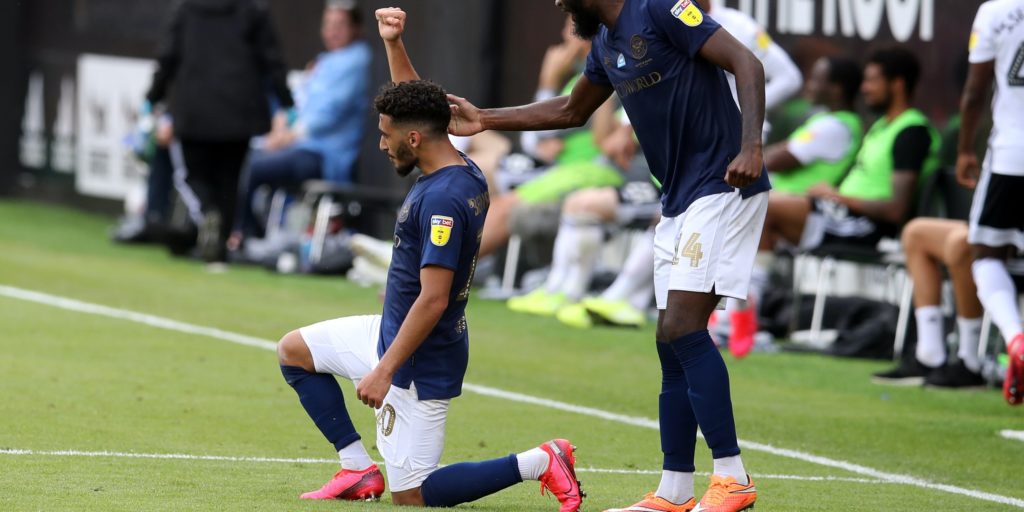 Emiliano Marcondes laid on a tap-in for Said Benrahma and lashed home a goal for himself as Brentford’s late double stunned Fulham 2-0 at Craven Cottage.

Super sub Marcondes climbed off the bench on the Championship’s resumption, first teeing up Benrahma before lashing home a fine strike of his own.

Just when Fulham were expecting to play out a draw, up popped Marcondes with a cute ball for Benrahma’s facile finish with only two minutes on the clock.

And then the replacement midfielder added insult to injury by firing home three minutes later himself, with Benrahma returning the favour and this time applying the assist.

Fulham were left to rue Aleksandar Mitrovic’s chalked-off goal, with the Serbia striker’s smart finish ruled out for offside.

Bobby Decordova-Reid struck the woodwork for the hosts too, on a galling return to action for Scott Parker’s men.

All eyes were on the league’s top two leading scorers before kick-off with Mitrovic and Ollie Watkins squaring up for an exciting head-to-head.

But in the end neither man could influence the outcome, with Brentford’s late brace turning the tide.

Benrahma’s hot form has Chelsea and a host of other Premier League clubs keeping tabs on his progress, and an 11th league goal for the term will only bolster that interest.

Fulham were sharper and better drilled from the off, repeatedly pinning Brentford back into their own half.

Josh Dasilva mustered the first shot on target in a rare Brentford raid, but the tame effort doubtless had him wishing he had played in the lurking Benrahma.

Mitrovic wasted a fine chance with a header lacking any real venom, allowing David Raya a straightforward save.

That at least spurred Fulham into a burst of action however, and the hosts were unlucky not to take the lead when Decordova-Reid lashed against the woodwork from the inside left.

Anthony Knoackaert was first to the loose ball but could only scoop wide with an attempted curler.

Neeskens Kebano wasted another fine opening when lofting a cross way past the well-positioned Decordova-Reid.

But then came the drinks break, and after the restart suddenly Brentford scrambled a foothold.

Tariqe Fosu-Henry drew a good save from Marek Rodak, and Henrik Dalsgaard hit the target too after a smart through ball from Christian Norgaard.

Fulham had the ball in the back of the net shortly after the interval, only for the offside flag to thwart a furious Mitrovic.

The Serbia striker cantered onto Decordova-Reid’s fine angled ball, stroked home and wheeled away – until the assistant’s raised flag stopped him in his tracks.

As with the first half, the drinks break curtailed Fulham’s rhythm with Brentford again stealing the momentum.

Replacement Shandon Baptiste sneaked clear on the left, cutting round the cover and into the box – and only a timely intervention from Rodak denied the lurking Watkins a tap-in.

Brentford were not to be denied however, and Marcondes floored Fulham by cutting in and delivering a smart ball that allowed Benrahma to tap home.

And as Fulham slumped at the death, Marcondes wrapped up the victory, scything in off the wing and firing home in style.