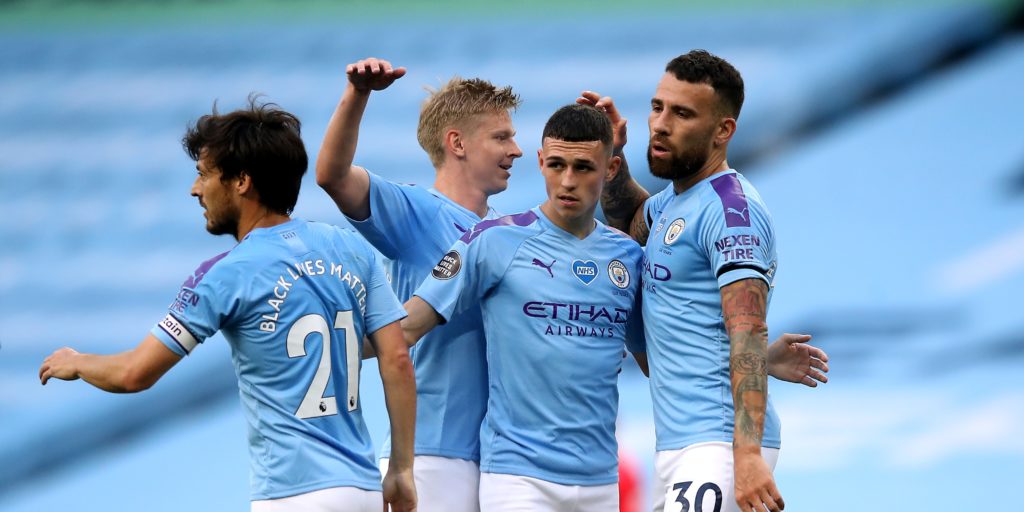 Burnley were embarrassed on and off the pitch as an offensive banner was flown above the Etihad Stadium in the early stages of a 5-0 trouncing by Manchester City.

The Lancashire club issued a statement strongly condemning those responsible for flying a plane carrying the message ‘White Lives Matter Burnley’ at the beginning of their first Premier League outing since the restart.

The aircraft circled the ground moments after all players had taken the knee in support of the Black Lives Matter movement at kick-off.

“We wish to make it clear that those responsible are not welcome at Turf Moor,” read a club statement. “This, in no way, represents what Burnley Football Club stands for.”

In terms of the game, the weakened Clarets were woefully outclassed by a much-changed but far superior City side, for whom Riyad Mahrez and Phil Foden each scored twice.

David Silva also got on the scoresheet as the champions claimed a victory that means Liverpool, who visit Eastlands next week, will have to wait a little longer to relieve them of their crown.

The downside for City was the loss of record goalscorer Sergio Aguero who, on his return to the starting line-up, limped off with a knee injury just before half-time.

City had made a number of changes themselves from last week’s comfortable victory over Arsenal, naming the likes of Kevin De Bruyne and Raheem Sterling on the bench while Aguero returned.

Burnley, faced with a number of problems, had no such quality to turn to. Senior stars such as Chris Wood, Ashley Barnes and Johann Berg Gudmundsson were out injured and a number of other players whose contracts are due to expire next week were omitted. The limitations on Sean Dyche were evident in that he only named seven of the now nine permitted substitutes.

City carved the visitors open for the first time on 16 minutes as David Silva played in Bernardo Silva only for the Portuguese to slice wide.

The opener came six minutes later as Foden’s sweet low strike from outside the area curled its way into the bottom corner.

City threatened more as Aguero had a shot blocked but the Argentinian may have hurt himself as he dragged the effort out from under his feet.

Mahrez doubled the lead when he took a great crossfield pass from Fernandinho in his stride and jinked into the area before shooting low across Nick Pope.

The consolation for City was that VAR ruled the incident a penalty and Mahrez calmly tucked home his second from the spot.

The procession continued after the break as David Silva made it 4-0 when he slid onto a Bernardo Silva pass following another short corner.

City manager Pep Guardiola refused to ease up, sending on De Bruyne just after the hour and Foden added the fifth moments later by finishing off a sweeping move from close range.

Leroy Sane, who it was revealed last week has rejected the offer of a new contract and could leave this summer, appeared for the last 11 minutes. It was the German’s first outing since suffering a knee injury in the Community Shield last August.

He got into the action late with a blocked free-kick and another shot over the bar.