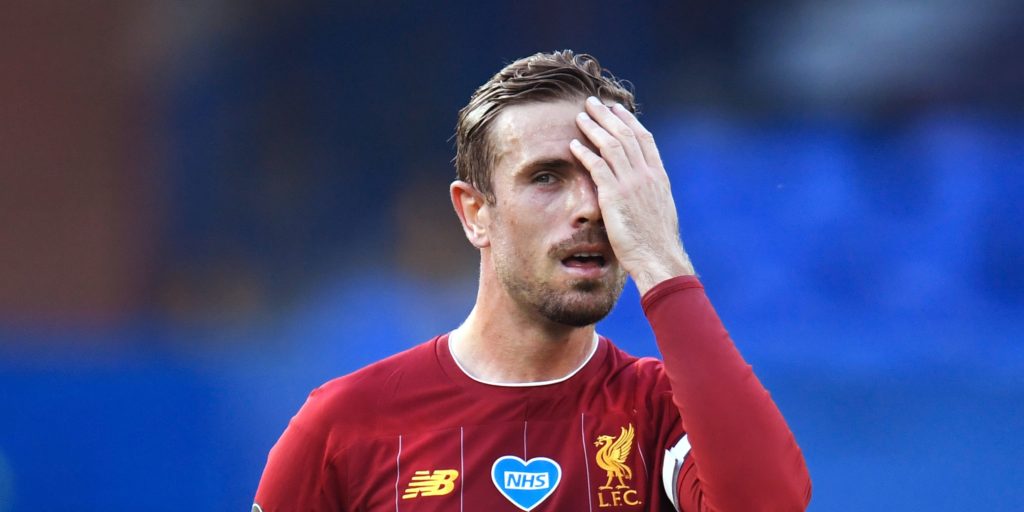 Only Barcelona, Napoli, Aston Villa, Atletico Madrid, Watford and Chelsea had stopped the Reds from scoring over the past 15 months before Sunday.

In the last 64 matches over the preceding 15 months only Barcelona, Napoli, Aston Villa, Atletico Madrid, Watford, Chelsea and now Everton have managed to stop the Reds scoring.

There was some mitigation in that they were missing Mohamed Salah, scorer of 70 goals in 100 Premier League matches for the club, and full-back Andy Robertson, who has averaged an assist almost once every four league games in the last two seasons.

Nevertheless, Henderson was not looking for excuses, saying to liverpoolfc.com: “I think we can be a lot better of course. We know that (but) there were still some positive things that I thought were good.

“We tried to adapt to the situation but overall obviously we are disappointed. There are still plenty of positives, a clean sheet and I thought we defended really well. We just lacked that bit in the final third.

“I think we can be a little bit better and more clinical but we’ll get ready now for Wednesday (at home to Crystal Palace). Overall, we’ve just got to take it, move on and try to be better in the next game.”

Not for the first time Liverpool were indebted to goalkeeper Alisson Becker for a couple of late saves, one a backheel from Dominic Calvert-Lewin which led to Tom Davies’ rebound hitting the post, for ensuring they at least left Goodison with a point.

As a result the Brazil international took his tally of clean sheets to 11, moving level with Sheffield United’s Dean Henderson and Burnley’s Nick Pope in the race for a second successive Golden Glove despite having played eight fewer matches.

“He has been outstanding all season and he’s come up with a brilliant save as well to keep us with a clean sheet, so that was important for us,” added the Liverpool captain.

“We’ve just got to perform as best as we can and try and win as many games as we can.”

Henderson’s fellow midfielder Naby Keita made only his fifth Premier League start of a season once again hampered by injury but impressed in a 65-minute spell.

The Guinea international caught the eye of boss Jurgen Klopp in training leading up to the restart and he repaid his manager’s faith with a performance of quick turns and driving runs, although most of his best work occurred in the 40 yards outside Everton’s penalty area.

Japan international Takumi Minamino was handed his first full start since signing from Red Bull Salzburg in January and, while asked to fill an unfamiliar position out wide on the right, he showed flashes of the potential he brings to the side.

He was withdrawn at half-time for Alex Oxlade-Chamberlain but Klopp insisted that was no reflection on his performance, although he suggested the need to ease players back into competitive action could see changes made for Wednesday.

“Naby was good, Taki was good – taking him off was nothing to do with Taki’s performance, Ox was lively,” said the manager.

“The performance of Naby was really good. He looked good in training so that’s why he played.

“You have to try things, how you can deal with the quantity of games. If after four weeks pre-season, and nine weeks without before that, we play a game every three days we have to think about things before we have problems.”

Robertson is expected to return at left-back for the visit of Crystal Palace but James Milner (hamstring) and Joel Matip (toe) will be assessed after picking up minor injuries against Everton.