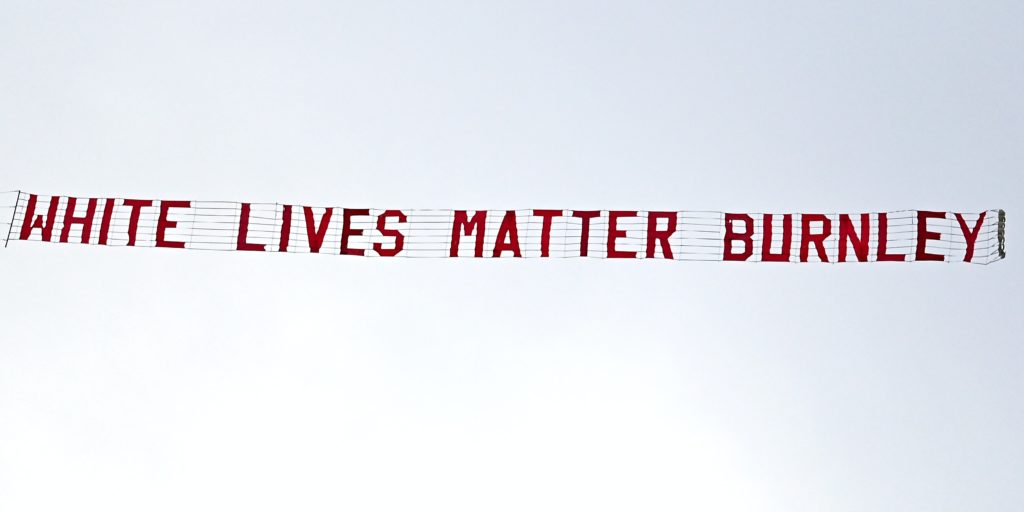 The banner was flown over the Etihad Stadium to coincide with players taking the knee in support of the Black Lives Matter movement.

The chairman of Burnley has vowed to “root out the racists” behind the ‘White Lives Matter’ banner flown over the Etihad Stadium on Monday night.

The Lancashire club were quick to condemn the banner, which was flown over the stadium at kick-off to coincide with players on the pitch taking the knee in support of the Black Lives Matter movement.

The club have promised to issue life bans to anyone involved, and Clarets chairman Mike Garlick told ESPN: “We will root out these racists and I am sure they will be dealt with in due course.

“We will do whatever we can to make sure justice is done against these people.

“Let’s be clear. The plane didn’t fly in our name. It has absolutely nothing to do with Burnley Football Club and we absolutely deplore it.

“But we have to talk about it. We cannot and will not sweep it under the carpet.

“I was at the game and I have been chairman/co-chairman for eight years. I have always been proud to be in that position, but I can tell you that I wasn’t proud to be Burnley chairman last night.”

Lancashire Police said it was looking into the incident to see whether any criminal offences had taken place.

The Professional Footballers’ Association equalities officer Iffy Onuora told the PA news agency that his view was that this could not be defined as a hate crime, but felt the act had “backfired” in any case as it has merely prompted further conversations about the BLM movement.

“I couldn’t tell you if it’s the definition of a hate crime, that’s for other people to say. For me, no.

“I just think it’s given people (a chance) to explain about the Black Lives Matter movement. BLM is not meant to supersede any other lives, the fact is all lives matter.

“We know that, that’s a given, and that’s a truism from now until eternity. What Black Lives Matter represented was a reaction to the fact that, although all lives matter in theory, in practice that hasn’t been the case.

“I think the context of it from their point of view is unfortunate is because all it’s made it possible to do is for people to double down on why this conversation is important, why these difficult conversations need to keep happening, why this is such an important time and possibly a transformative moment.

“So in that sense I would say it’s backfired – we’re still having these conversations, it’s kept the momentum going of the last few weeks and it’s enabled us to keep getting the message out there.”

The aircraft took off and landed at Blackpool Airport, which said it would stop operating banner flights in the wake of the incident.

Stephen Smith, manager of Blackpool Airport, said: “Blackpool Airport and Blackpool Council are outraged by this incident. We stand against racism of any kind and absolutely do not condone the activity. The message was offensive and the action reprehensible.

“The decision to fly the banner was taken entirely by the banner-flying company without the knowledge or approval of the airport or Blackpool Council.

“Following an emergency review this morning Blackpool Airport will suspend all banner-towing operations at the airport with immediate effect and we would suggest that other airports should also consider this approach in light of what has happened at Blackpool.”

“This crass publicity stunt was done with the intention of offending and causing hurt to so many in our community and those responsible should be ashamed of their desire to divide people,” he said.

“They do not speak for the town and the club has my full support in finding out who they are and taking action.

“These attitudes have no place in Burnley or our society. We should be working together to tackle inequality rather than using people’s race, religion or background to divide our community. I will keep working with the Premier League and Burnley to stamp out prejudice and discrimination.”