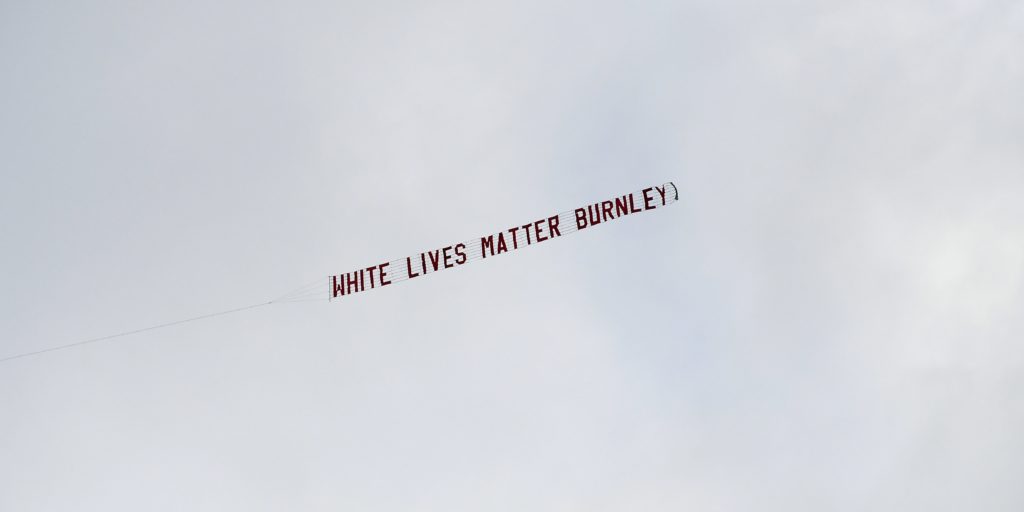 Phil Foden and Rihad Mahrez each netted a brace as Manchester City hammered the Clarets.

Burnley captain Ben Mee admitted he was ashamed after an offensive banner was flown over the Etihad Stadium during the team’s 5-0 thrashing by Manchester City on Monday evening.

A plane carrying the message ‘White lives matter Burnley’ flew over the ground in the early stages of the team’s first Premier League outing since the competition’s restart.

It occurred just moments after all players had taken the knee in support of the Black Lives Matter movement at kick-off.

The club issued a strongly worded statement before the end of the game and Mee revealed his embarrassment afterwards and felt it had affected the team’s performance.

“It definitely had a had massive impact on us to see that in the sky. We were embarrassed, disappointed, upset. We are embarrassed that our name was in it.

“That they tried to attach it to our club. It doesn’t belong anywhere near our club. Fans like that don’t deserve to be around football.”

Clarets manager Sean Dyche, who did not see the plane at the time, was also disappointed about the incident.

Dyche said: “As a club we can only apologise. It is unacceptable.”

The club statement added the perpetrators were not welcome at Turf Moor and would be banned for life if identified.

“This, in no way, represents what Burnley Football Club stands for,” it read.

On the field it was a chastening night for Burnley, who were weakened by injuries and the absence of a number of players whose contracts are due to expire next week.

Dyche hinted that the contract situation was a frustration for him.

“We are in incredible financial shape,” he said. “We are a club that has been run very well, financially, down the years and that has allowed us to come through this period without questions.

“But decisions have to be made. I can only advise, which I have done, but the chairman has made different decisions.”

Dyche conceded his team were outplayed by City.

He said: “They’re top class. Some people suggest they have not been as strong this season but they have still got top-class players. It was always going to be a big ask.”

The big downside for City came with the loss of record goalscorer Sergio Aguero with a recurrence of a knee injury just before half-time.

Manager Pep Guardiola now fears the Argentinian could miss the remainder of the season.

“It doesn’t look good unfortunately. He was struggling for the last month with a problem in the knee,” Guardiola said.

“We will see tomorrow exactly what he has but it doesn’t look good for the season.”

Guardiola was pleased with the performance of his side.

He said: “We played really well – a solid performance, especially in the beginning. The first goal and second helped us a lot.”

Asked about the banner incident, Guardiola said: “Of course white lives matter – but the black lives matter too. Human beings matter, everyone.

“I have travelled a lot around the world and lived in many countries. Everyone one of us, we are all the same.”