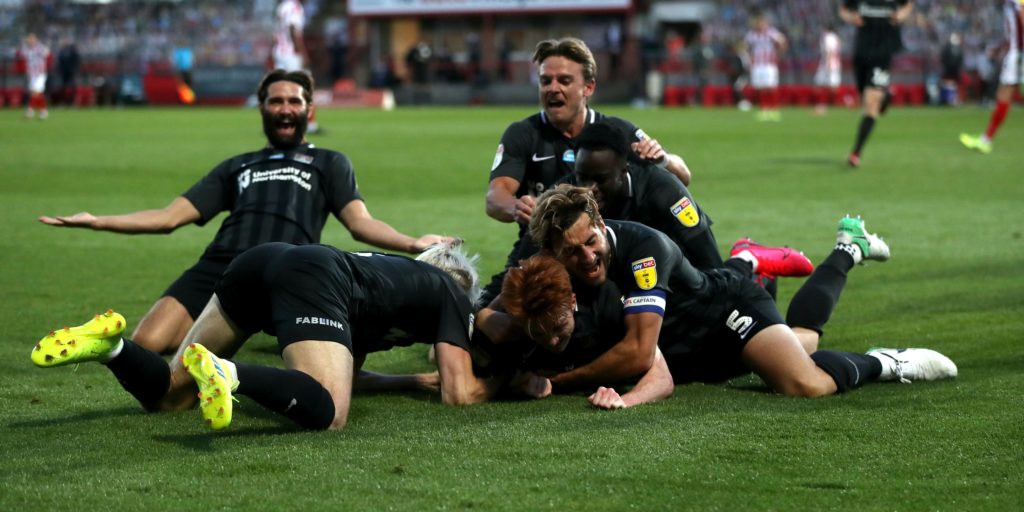 Two goals from Callum Morton and another from Vadaine Oliver sent the Cobblers through.

Northampton manager Keith Curle saw his side book their place in the League Two play-off final at Wembley with a 3-0 victory at Cheltenham and then admitted that he needed promotion for his own CV.

Two goals from Callum Morton and another from Vadaine Oliver wiped out the Robins’ two-goal cushion from the first leg and set up next Monday’s Wembley date with Exeter.

Curle said:”I have a belief of where I want to go in my career and I need a promotion for my own profile. I think I’ve done a very good job at some of the clubs I’ve walked into but I need people to know that I’m not just a firefighter but that I can win games of football.

“We had spoken about the first goal and how vitally important it was. We didn’t know when it was going to come but our plan was to get the first goal knowing that it would have an impact.

“I mentioned beforehand that a 2-0 lead was a difficult lead especially in a semi-final second leg at home. I’m not saying it’s not undefendable but it’s a mental challenge for the players. We thought we could impose ourselves.

“Callum Morton did everything that we needed him to do but today was about a team performance, a unity. We had an understanding all over the pitch.”

And Curle explained how he had tried to inspire his players ahead of the game.

“All the players thought we were going to show them a clip of the first game but we didn’t – we showed them a documentary when Arsenal had to go to Anfield and win 2-0 to win the league.

“It’s not an easy thing to do and it resonated with me. I wanted to pass that on to the players that if you believe then something can happen.”

He said: “We didn’t turn up, got beaten up and didn’t do the basics of the game which we normally do well. That put us on the back foot and then we didn’t pass the ball particularly well.

“Every department of the game we didn’t do very well and that’s why we get a result like that.

“It’s the first time we have been beaten up this season and the third goal encapsulated the night’s performance but you have to suck it up and learn from it.

“They play in a very basic way but they do it effectively – they played to their strengths and they did it better than us.