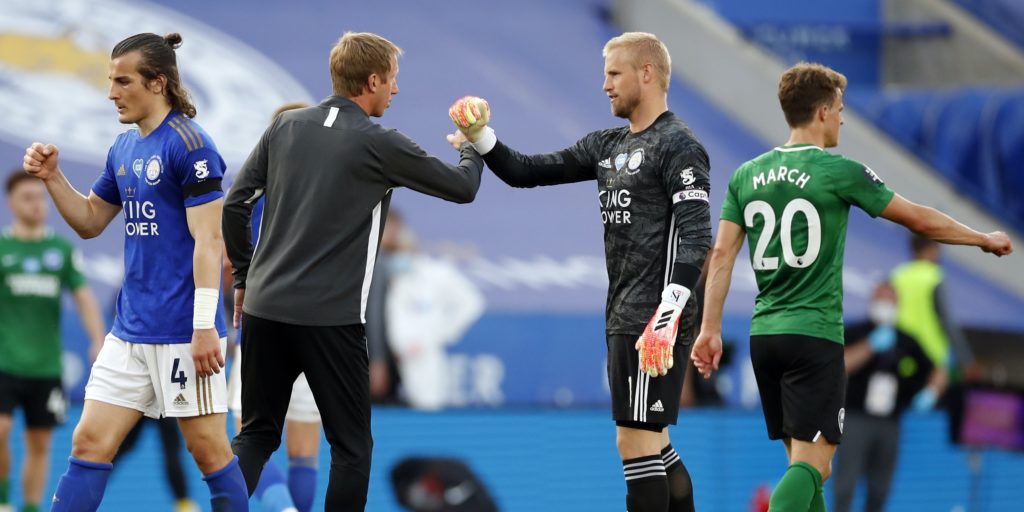 The Dane saved the Foxes.

The Denmark international kept out Neal Maupay’s 14th-minute spot-kick after Aaron Connolly was clumsily brought down by James Justin.

It was a poor penalty from the Brighton striker, with Schmeichel not needing to stretch or extend himself to keep it out as he smothered the shot down to his right.

It spared Leicester a fifth defeat in the last 10 Premier League games as Rodgers’ side continue to limp towards Champions League qualification.

“Kasper has made a great save from the penalty, he’s invaluable,” Rodgers said.

“He’s a world-class goalkeeper. There is absolutely no doubt that he is one of the top goalkeepers in this league.

“Just his presence in the goal and his leadership. He studies penalty takers and puts in the work and he’s so agile.

“He’s been absolutely brilliant in the two games back. He made two important saves at Watford and another important save tonight.”

Leicester were lacklustre on Tuesday night, offering little in attack as top scorer Jamie Vardy and Kelechi Iheanacho were largely anonymous and starved of service.

Rodgers’ side, who were strong favourites to finish third at the turn of the year, are now looking over their shoulders at fourth-placed Chelsea – who visit the King Power Stadium in the FA Cup quarter-finals this weekend.

“We haven’t quite found our rhythm yet in attack yet,” admitted Rodgers. “The first half wasn’t the best half of football, to be honest, but the second half was much better.

“We kept going right to the very end but we just need to find that extra bit of quality and we will work to do that. Hopefully that will come sooner rather than later.

“We certainly want to be better, there’s no denying that. The performance levels have to improve but we have a group who is very honest and humble enough to accept that and who will put the work in to make that happen.

“You are never going to go through the whole season playing absolutely amazing but in the games back we have showed a good mentality.”

Maupay’s penalty miss could leave Brighton thinking about what might have been as three points would have given them significant breathing space in the battle for survival.

However, Graham Potter’s men built on their home win against Arsenal at the weekend with another point on Tuesday night and the Brighton boss was pleased with the performance.

“It’s a really good point, a hard-earned point. I’m really proud of the performance and the attitude of the players. The endeavour and work-rate to keep a clean sheet was excellent,” said Potter, whose team are six points above the relegation zone.

“I’m delighted with four points (since the restart) but there is a long way to go. We still need points but that’s not the focus, we just concentrate on the next game and our performances and making sure they are good enough to get points and get enough points to stay in the Premier League.

“We are in a good place after four points from two difficult games, and games that have been in a short space of time too. With a bit of luck we could have had another three points tonight but it wasn’t to be.

“We’ve got a little bit of a breather now before preparing for Manchester United (June 30) so we’ll use that time to recover but you can see in the last couple of games that we’re prepared to battle to make sure we stay in this division and that’s a good sign going forward.”