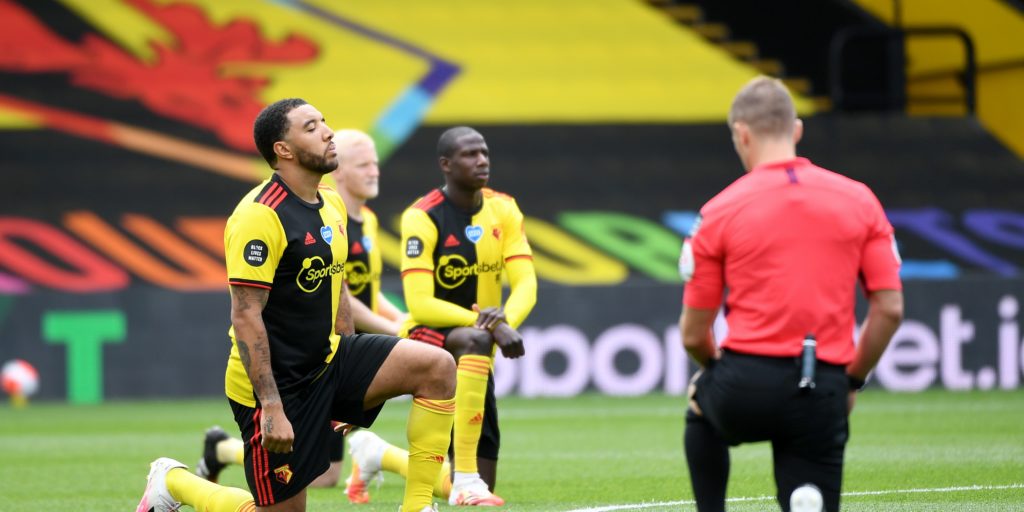 The initiative’s logo adorned players’ shirts in the first round of fixtures played when the competition resumed.

The words ‘Black Lives Matter’ replaced players’ names on the back of their shirts for the first 12 games when the Premier League campaign resumed last week.

Names have since returned, but the Black Lives Matter logo, designed by Deeney’s partner Alisha Hosannah, will remain on top-flight shirt sleeves.

Deeney told Sky Sports News: “We have to thank the Premier League for giving the players the opportunity to speak, a platform, and they are side by side with us.

“I’ve been in a lot of meetings and I’m very grateful to them for that, but now I feel there’s a lot of pressure on the media and players to keep the conversation going and keep it in the public domain.

“We’ve seen before with other campaigns, like Kick It Out, they’re very much (talking about it) one week and you don’t hear anything about it for the rest of the year.

“We want to make sure this conversation continues.”

As part of the #PlayersTogether initiative, a #ShirtsforChange raffle of a selection of signed Premier League shirts has taken place and all proceeds will be donated to the Stephen Lawrence Trust.

Deeney has trademarked the Black Lives Matter logo, which includes a clenched fist of solidarity, within a circle.

“People think I’m trademarking it to make money off it. I’m not struggling for money, I want to make that very clear,” Deeney said.

“I trademarked it because my partner designed it and did all the logos for it and we gave it out for the Premier League to use it.

“Anyone using it in the future, all have to give donations to the charity. My family are not making any money out of this, I promise you.”

Deeney said he was hopeful the Black Lives Matter protests can bring about meaningful change.

“It feels different,” he said. “I don’t know if confidence is the word because you’re always going to get backlash from other people who object to certain things.

“You have confidence things will change because the demographic has changed now.

“It’s not middle-aged black guys or black women, it’s right across the board now. I think if you looked at the protests you saw a very diverse group: white, Asian, black.

“All these people are saying this is not acceptable and that gives me the biggest sense of change.”

On Tuesday the Premier League increased the pressure on social media companies to tackle online racist abuse of its players, managers and coaches with the launch of a new reporting system.

The system will also be open to reports of abuse directed at family members of players, managers and coaches.

Deeney has urged other organisations, including the Government, to help the Black Lives Matter movement gather further momentum.

“We saw how well Marcus Rashford did and when the NHS needed more money, the Government were very quick to call on all of us,” Deeney added

“Now, why don’t we flip that conversation and call on the Government to help change guidelines and education reform?

“We have to do it all together. It can’t just be Troy Deeney screaming out from the rooftops, otherwise it does change anything.

“When the Premier League, or Sky and big platforms all come together, that’s how we can we help reform and change.”