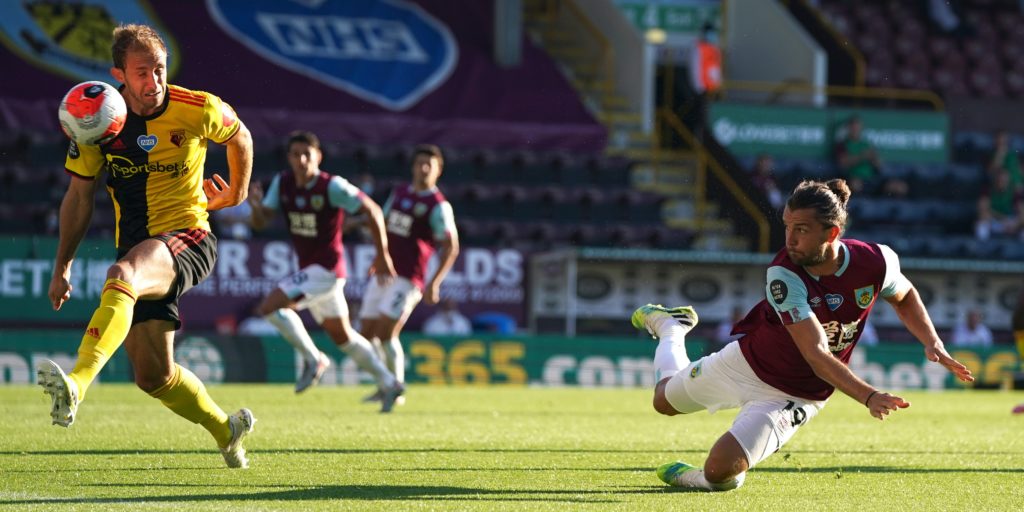 The result comes after a turbulent week for the Clarets.

Jay Rodriguez gave Burnley cause for cheer after a tough week on and off the pitch as his 50th Clarets goal earned a 1-0 win over Watford.

The evening started with the club delivering another forceful response to the ‘White Lives Matter Burnley’ banner flown over their 5-0 defeat at Manchester City on Monday night, while Sean Dyche awoke to headlines questioning his future at the club as he played down suggestions of a rift with the board.

Dyche made no changes to the side thrashed by City on Monday but could at least fill out the bench three days on, with Phil Bardsley available after agreeing fresh terms and Mace Goodridge back from injury.

In the wake of the banner flown over the Etihad, the club produced two banners of their own – ‘One Club For All’ and ‘This is Everyone v Discrimination’ – prominently displayed alongside the ‘Black Lives Matter’ message in the Jimmy McIlroy Stand.

Players from both teams took a knee at kick-off, and Burnley’s positive response continued on the pitch as they had the better of the first half.

Though Watford’s Craig Dawson spurned an early chance, heading straight at Nick Pope from Tom Cleverley’s free-kick, it was Ben Foster’s goal under the most threat in the early going.

Rodriguez’s snap shot from an angle deceived the Watford goalkeeper, who could only parry it high in the air before punching clear under pressure from Matej Vydra.

Rodriguez was offside when he headed in Josh Brownhill’s cross in the 14th minute, and then shot straight at Foster when the ball fell for him on the edge of the box.

The best chance came in the 21st minute when Foster raced off his line but was caught in no man’s land, grateful to see Vydra’s lob strike the post before Rodriguez’s shot was blocked by Dawson on the line and Brownhill dragged an effort well wide.

Watford created openings of their own but could not test Pope as the final ball was too often missing between Troy Deeney and Danny Welbeck.

Nigel Pearson made a double switch at the break, with Abdoulaye Doucoure and Craig Cathcart replacing Cleverley and Christian Kabasele, and it seemed to spark some life in his side as they kept Burnley pegged back early in the second half.

Space opened up for Will Hughes in the 50th minute but there was no bend on his shot as it whistled wide of the post.

Pope spilt a Hughes corner on the hour but Cathcart’s snap shot was blocked, then moments later James Tarkowski made a goal-saving tackle to deny Welbeck after he and Deeney finally hooked up together.

Deeney got up to head powerfully at goal from a corner, but Dwight McNeil was on hand to block on the line before Hughes blazed wide on the follow-up.

But the drinks break seemed to help Burnley as the tide turned again, and they took the lead in the 73rd minute as Rodriguez got across his man at the near post and dropped low to head home McNeil’s cross.

Vydra had a chance to double the lead in the 86th minute only to shoot straight at Foster after breaking the offside trap, and Burnley were grateful to see Adam Masina head over from a corner in the last minute of normal time.