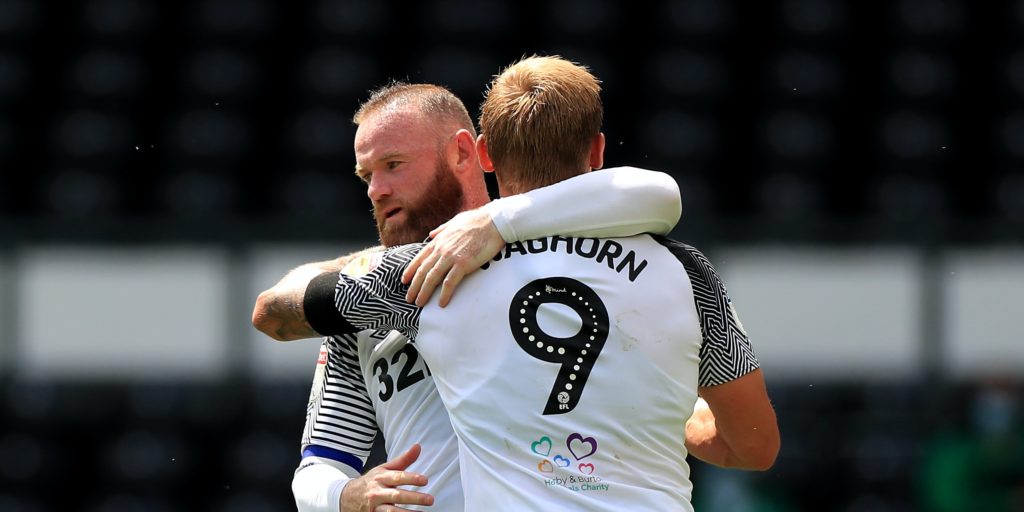 The Rams have won their last four league games.

Derby maintained their late charge for the Championship play-offs with a 2-1 victory against Reading at Pride Park.

A quick-fire double late in the first half from Tom Lawrence and Wayne Rooney, scoring his fifth goal for the club from the penalty spot, in truth flattered the hosts at the break as Reading had created the better chances and hit a post through Ovie Ejaria.

Andy Rinomhota’s header after 62 minutes saw the Royals pull a goal back, but Derby made it two wins from their two matches since the resumption.

Both sides had a player sent off after the final whistle as Lawrence and Matt Miazga were shown red cards following a confrontation.

It was a fourth successive league victory either side of the lockdown and moved Phillip Cocu’s side up to eighth in the table, although they stay three points outside the play-off places.

There was one change to the Derby side that won at Millwall as Duane Holmes was replaced by Chris Martin, who this week signed a temporary extension to his contract meaning he is available for the remainder of the season.

Reading made three changes. George Puscas came in for the injured Lucas Joao, while Rinomhota and the fit again Miazga were also recalled. Michael Morrison and Jordan Obita dropped to the bench.

Martin was involved early on as he headed the ball down for Lawrence, who struck his shot cleanly from just outside the area but Rafael smothered it easily down to his right.

Some sloppy play in midfield by Derby should have seen Reading take the lead after 19 minutes. Chris Gunter pounced on a loose ball and released Ejaria on the left with the hosts short at the back.

Ejaria teed up Puscas inside the penalty area but he scooped his shot over the crossbar after stepping neatly around Matt Clarke’s recovering challenge.

Michael Olise managed to work Ben Hamer just after the half-hour with a curling effort before shortly afterwards Ejaria saw his strike from a tight angle hit a post and the rebound saved by the goalkeeper.

Reading were in the ascendancy but their failure to take their chances was punished by Derby before half-time. Lawrence curled a shot into the top corner of the net in the 44th minute and Rooney quickly doubled the advantage with a penalty.

Martyn Waghorn was fouled by Liam Moore and England’s all-time leading goal-scorer netted with a low, hard drive as Rafael dived the opposite way, giving the hosts a flattering lead at the break.

Rooney went close again at the start of the second half as his curling free-kick had to be helped round a post by the goalkeeper.

Reading pulled a goal back just after the hour mark when midfielder Rinomhota beat Hamer to an aerial ball and planted his header into the net.

The Royals pushed for an equaliser but Derby were disciplined and organised defensively and, but for making a save to deny the lively Ejaria, Hamer was not really troubled.