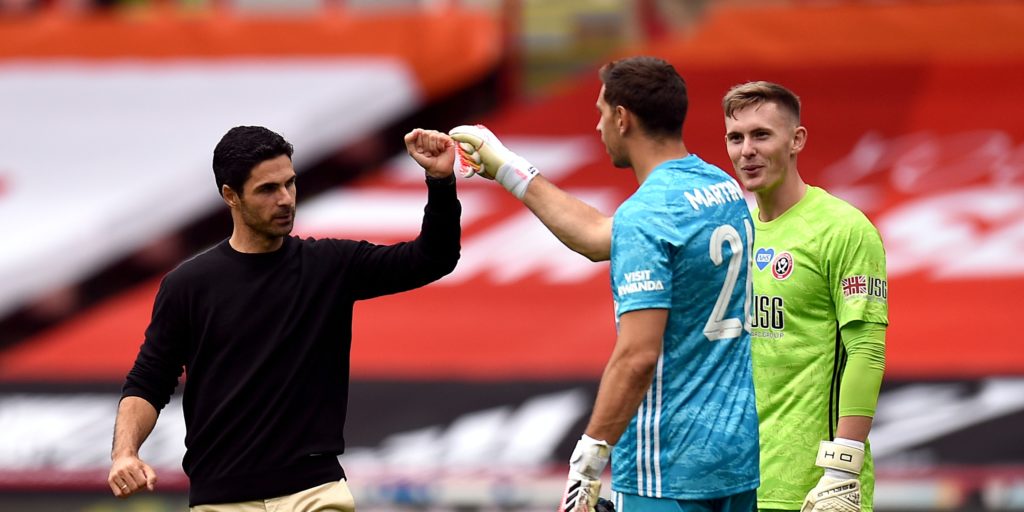 Arsenal manager Mikel Arteta issued a rallying cry to his players to go and win the FA Cup and secure European football next season after they edged past Sheffield United to reach the semi-finals.

The Gunners booked a place in their first domestic semi-final of the post-Arsene Wenger era with a 2-1 away win at Bramall Lane.

Nicolas Pepe’s first-half penalty looked like it would be all that separated the sides but late drama saw David McGoldrick equalise with three minutes remaining, before substitute Dani Ceballos won it for Arteta’s side in injury time.

Arteta said: “I am really pleased with the result, this is a difficult place to come and get a win. After conceding so late, to show the reaction is not easy and it is very pleasing and we are back at Wembley.

“It is a great opportunity to try and win a title and play in Europe. We still have to improve in many areas but every win gives you some credit and encouragement. Hopefully we can now have some momentum.

“I can never fault the effort of the players. We still have gaps to improve but I am pleased to get the win. The attitude and commitment of every single player was spot on and the players did exactly what they were asked to do.

“I think every win improves the spirit and happiness of the team and we have an opportunity now.”

Pepe’s penalty was the forward’s eighth goal of the season since his GBP 72million arrival last summer and Arteta believes the 25-year-old is starting to realise his potential at the club.

“I am excited at what he is bringing to the team – I think he has had a click,” said Arteta. “He gives us that creativity in the final third that big teams need. He can be unpredictable but he has incredible potential.

“There are things he needs to work on but he could be the difference for this team.”

A negative for Arteta was the injury which forced off David Luiz early in the second half.

The defender had to be substituted following an innocuous-looking incident as he allowed the ball to run out for a goal kick.

“He has hurt his ankle,” said the Arsenal boss. “He will get assessed tomorrow but he was in pain.”

Prior to the curtailment of football due to the coronavirus pandemic, Sheffield United may have been favourites to progress but they have been surprisingly poor since the resumption, now losing three of their four matches in all competitions.

However, Blades boss Chris Wilder felt Sunday’s performance was a step in the right direction despite the disappointment of the defeat.

“It’s a positive step,” said Wilder. “Of course we are gutted to lose but there are ways to lose football matches and we pushed Arsenal to the limit. They had to defend for their lives at times.

“It was pretty comfortable for Manchester United in the week but I thought we made that an uncomfortable afternoon for Arsenal.

“I’d like to make it a more uncomfortable afternoon from a technical point of view but I think we aren’t showing that due to a lack of confidence at the minute.

“As I said, there’s a way to lose games and we showed plenty of qualities today that you need to win football matches at this level.

“I had complete belief we would get back into the game, especially in the second half when I thought we dominated. But in the end Arsenal have showed that little extra bit of confidence, after we had given the ball away, that we lacked and have won it.”