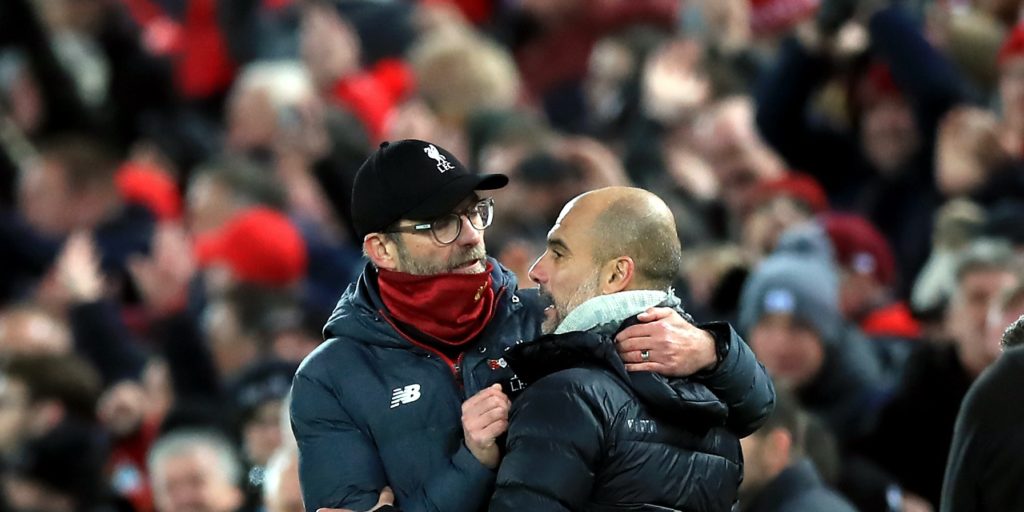 The newly-crowned champions head to the Etihad Stadium on Thursday night.

Manchester City will form a guard of honour for new champions Liverpool when the sides meet next Thursday, manager Pep Guardiola has said.

Liverpool took the Premier League crown City have worn for the last two years when they ended their own 30-year quest for a league title this week.

When football resumed after lockdown earlier this month, the Reds’ upcoming trip to the Etihad Stadium had been earmarked as the potentially decisive game in the title race.

But City’s loss at Chelsea last Thursday put the Merseysiders mathematically out of reach and Guardiola feels it would be sporting to pay tribute to Jurgen Klopp’s men.

“Always we receive Liverpool when they come to our house in an incredible way. They cannot complain and of course we are going to do it because they deserve it.”

After missing out to City by a point last season, European champions Liverpool have been dominant this term, securing the title with a record seven games to spare, winning 28 of 31 matches. They will travel to Manchester with a 23-point advantage over second-placed City.

It has been suggested City’s hunger or passion may have dipped following last year’s treble success but Guardiola insists that is not true.

He said: “A team that wins eight titles (trophies) in the last three years have passion, in every single game, in every competition, everywhere. No one in this country can say that.

“It is so difficult to do what we have done in the most difficult league in the world but you cannot win all the time.

“There was one team that was exceptional and, when one team is exceptional, I say learn from them and congratulate them. It is simple.

City still have much to play for, including the Champions League, which will resume in August, and the FA Cup. They travel to Newcastle for their delayed quarter-final tie on Sunday.

Guardiola said: “Right now it is a priority because it is the next game and we can get Wembley again in the semi-final. I saw Newcastle and they have the weapons to punish us.

“The important thing is this game and after you can finish the Premier League as best as possible, finish second, and after that we have time to prepare for (Real) Madrid.”