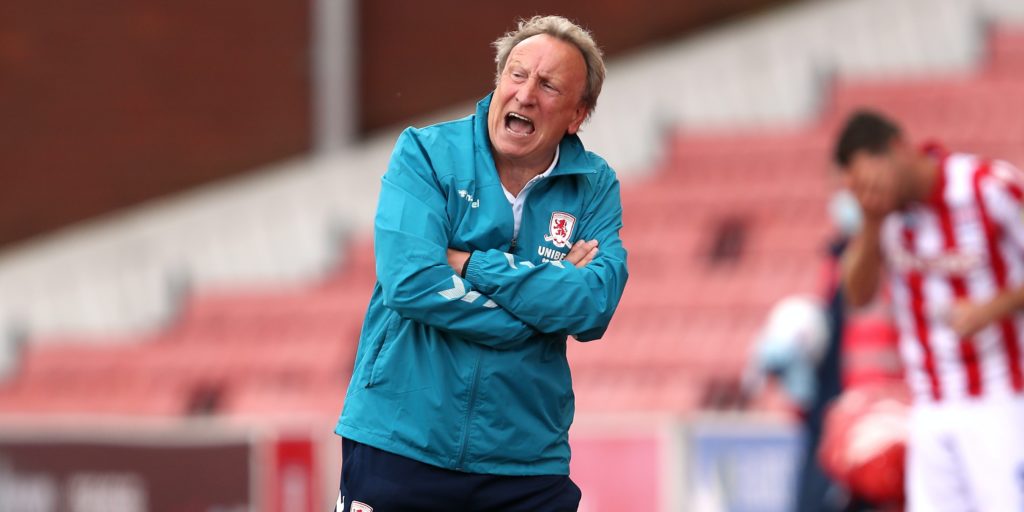 The evergreen Warnock – rapidly approaching 1,500 games as a manager – watched on as a goal in each half helped lift Boro above the Potters in the table and eased them two points clear of the drop zone.

A second win in 13 games was thoroughly deserved in the first match since Jonathan Woodgate’s sacking, while Stoke are now just a single point above the bottom three.

Their five-match unbeaten run came to a shuddering halt on what was a definite off-day for them, with Nick Powell sent off late on.

Warnock will have been delighted with his first 45 minutes at the Boro helm as his latest team deservedly led at the break at the bet365 Stadium.

Now in charge of his 16th club after an incredible four decades in management, the 71-year-old watched on as forward Ashley Fletcher handed the visitors the advantage in the 29th minute.

Boro’s number 11 scored his 11th goal of the season in what proved to be an impressive personal first-half performance alongside Britt Assombalonga.

Stoke had threatened first when Jordan Thompson curled narrowly wide after being neatly teed-up by Powell.

At the other end, Fletcher headed another Roberts free-kick over the crossbar, while the hosts’ best chance came after 21 minutes.

Sam Clucas whipped in a low cross from the left and as James McClean darted into the box, his perfectly-executed volley was superbly tipped over the top by agile goalkeeper Dejan Stojanovic.

Assombalonga also went close shortly before Boro’s breakthrough when his drilled free-kick from 22 yards missed the target by a couple of feet.

Michael O’Neill’s men ought to have levelled seconds after the restart.

Tyrese Campbell’s low cross into the six-yard box seemed to evade everyone before McClean eventually side-footed straight at Stojanovic from close in.

The woodwork got in the way in the 50th minute as McClean’s downward header from Tommy Smith’s deep cross struck the base of a post.

Those misses were punished by Boro as they extended their lead in the 62nd minute.

Substitute Marcus Tavernier pounced with his first intervention, taking down Jonny Howson’s long pass before firing home left-footed past Jack Butland from just outside the box.

There was almost a swift response from the hosts, but Powell lashed straight at Stojanovic.

Stoke’s best chance of a consolation fell to sub Lee Gregory, who fired straight at the keeper.

Their miserable afternoon was complete in the 89th minute when Powell was sent off after being shown a second yellow card within the space of 60 seconds.