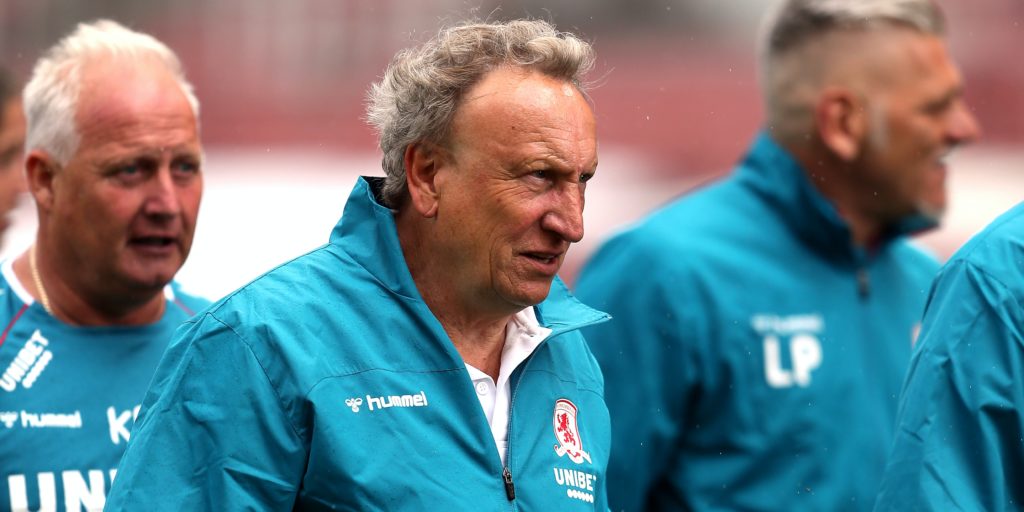 Delighted Neil Warnock saluted a “great result” in his first game as Middlesbrough manager but knows his team are far from out of trouble just yet.

A goal in each half eased Boro two points clear of the Sky Bet Championship drop zone as a 2-0 win saw them leapfrog their hosts and fellow strugglers Stoke in the table.

Reflecting on a well-deserved victory, with Boro now the 16th club he has managed in a distinguished career, Warnock said: “I have been missing that banter around the dressing room so it is good to be back, but even though this was a great result, we’re miles away from being safe yet.

“We’ve still got seven games left to play so we just need to keep going.

“Don’t forget I’ve been in the game a long time now and I’ve been in jobs where we’ve lost the first two or three games.

“In that situation it’s just about sticking to your principles. I would have done that whatever the result here today.

“It was a good team performance from our lads. They flung their bodies on the line and I love to see that.

“Nobody likes to see their manager going, but you just have to get on with it. The lads have been great during these last few days.

“The front three were unbelievable – Fletch (Ashley Fletcher), Britt (Assombalonga) and we got a good hour out of Patrick Roberts.”

Boro were in front at the break thanks to Ashley Fletcher’s well-taken strike. He glanced home his 11th goal of the season in the 29th minute.

James McClean’s downward header struck a post early in the second period before Boro made it 2-0 just past the hour when substitute Marcus Tavernier’s first involvement was to crash home left-footed from just outside the box.

Stoke’s rotten afternoon was complete late on when Nick Powell was sent off after being shown a second yellow card in the space of 60 seconds.

The Potters are now just a point above the bottom three after their five-match unbeaten run was ended.

Boss Michael O’Neill said: “We just made things too difficult for ourselves too often.

“We knew what to expect from Neil’s team beforehand but we struggled to deal with them.

“We conceded too many free-kicks and then missed a number of gilt-edged chances to equalise either side of half-time.

“We then gave away a poor goal and you’re chasing it at 2-0 behind.

“Physically we were left wanting far too often. Certain situations weren’t dealt with well enough and we got what we deserved.

“We’re in a situation now, too close to the bottom three, but I’ve never thought the job was done here.

“I don’t think we’ve been more than three points above the bottom three all season. Results like this brings that situation right into sharp focus for everyone again.

“Too many times today we put ourselves into difficulties and in the end we’ve not been able to get out of it.”