Home News We will have to improve to reach FA Cup final, says match-winner Harry Maguire

We will have to improve to reach FA Cup final, says match-winner Harry Maguire 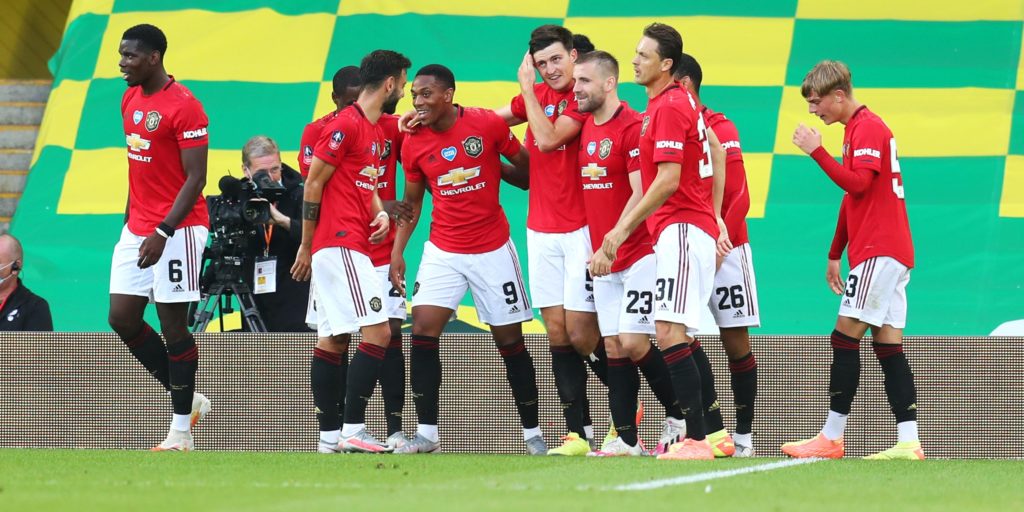 The defender grabbed a late winner for Manchester United against 10-man Norwich.

Harry Maguire knows Manchester United will have to vastly improve to win the FA Cup after sealing Ole Gunnar Solskjaer’s side a semi-final spot with a late extra-time winner against 10-man Norwich.

The Red Devils made hard work of Saturday evening’s clash against the Premier League’s bottom side, having gone ahead early in the second half through Odion Ighalo’s fifth goal in four starts for the club.

Todd Cantwell levelled from distance and, just as Norwich’s hopes of reaching the semi-finals for the first time since 1992 began to grow, defender Timm Klose was sent off for bringing down Ighalo.

United peppered the hosts’ goal in extra-time and finally found a way past inspired Norwich goalkeeper Tim Krul in the 118th minute when skipper Maguire directed home to seal a 2-1 win.

“It would mean everything (to win the FA Cup),” the defender said.

“I joined this club to win trophies. We’re in a semi-final of the FA Cup, it’s a great tournament, and we’re going to look forward to it.

“Hopefully when the semi-final does come and whoever we’re drawn against we play a lot better than we have done tonight.

“It was a difficult game and we made hard work of it. We weren’t at our best and sometimes in cup games that happens.

“You’ve got to find a way to go on and get the victory and get through to the next round and we’ve managed it in the end.

“Like I said, we made hard work (of it). We weren’t at our best tonight but we’re in the next round.”

Asked why they were not at their best, Maguire told the BBC: “I don’t know. We had a tough game obviously with the heat in the Premier League but we made changes so we should have been fresh.

“I can’t really point on a finger at the moment. We’ll have to watch it back and analyse it.

“We played a little but slow and we tried to go through the middle too often, especially when we were trying to break down the 10 men – we needed to play wide a lot more and make a move.

“But in the end we’ve got there, we’re pleased, we’re in the semi-final and that’s all that matters, really.”

United are through to their 30th FA Cup semi-final – more than any other team in the competition’s history – and manager Solskjaer’s relief was clear.

“It’s cup football for you,” he said. “The game was not the greatest, not the spectacle, but I felt we kept the ball OK, but we didn’t threaten enough, didn’t create chances.

“But you’re delighted that you’re in a semi-final. We’re in the last four.

“Good workout, we got minutes into many players, rested quite a few and some nice goals, good for Harry to get the winner.”