Home News Can the Cobblers nail the step up? How the previous play-off winners have fared

Can the Cobblers nail the step up? How the previous play-off winners have fared 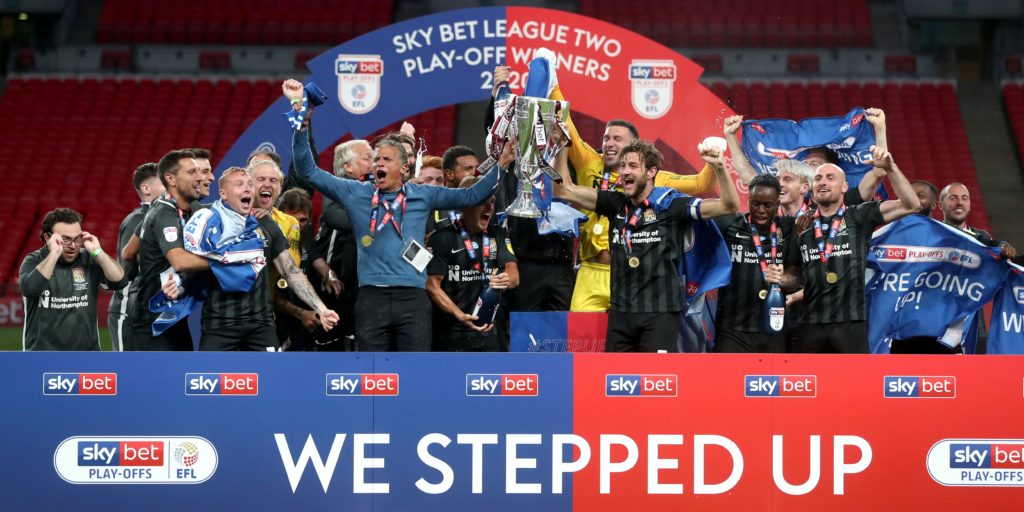 Northampton saw off Exeter at Wembley to make it to League One.

Northampton will spend next season in League One after easing their way past Exeter in the League Two play-off final at an empty Wembley Stadium.

Here, the PA news agency takes a look at how their most recent predecessors have fared in the higher division.

Connor Jennings’ last-gasp extra-time strike at Wembley took Tranmere up at Newport’s expense just 12 months after they had emerged from the National League via a similar route. However, their stay proved to be brief. When League One and League Two clubs voted to end their season amid the ongoing Covid-19 pandemic, Rovers sat inside the bottom three on both points and points per game and were relegated.

Coventry launched their climb back up the league ladder with a 3-1 play-off final victory over Exeter, having finished sixth at the end of the regular season. They more than made a fist of life in League One at the first attempt, when they finished eighth at the end of the 2018-19 campaign, and were five points clear at the top when the halt was called this season, securing promotion to the Championship as champions.

Having secured the final play-off berth, Blackpool edged past Luton 6-5 on aggregate in a thrilling semi-final showdown and then beat Exeter 2-1 a Wembley courtesy of Mark Cullen’s winner. They have since established themselves in League One, finishing 12th in 2017-18 and 10th a year later, and they were lying in 13th place when the curtain fell this time around.

Fourteen years to the day since the club’s formation, AFC Wimbledon won a sixth promotion to climb into the third tier with a 2-0 win over Plymouth cemented by substitute Adebayo Akinfenwa’s stoppage time penalty. Life in League One has been challenging since, but they have managed to keep their heads above water, albeit only on goal difference at the end of the 2018-19 season, and they occupied the last safe position when the current campaign ended prematurely.

It proved to be an eventful day at Wembley for Southend keeper Dan Bentley, whose extra-time own goal looked to have handed Wycombe victory until Joe Pigott’s late equaliser set the stage for him to redeem himself in a 7-6 penalty shoot-out win. The Shrimpers initially prospered in the higher division, missing out on the play-offs by just one point at the end of their second campaign, but have found the going significantly tougher in recent seasons and having survived by virtue of goal difference 12 months ago, they will play in League Two again next season after collecting just 19 points from the 35 games they completed.