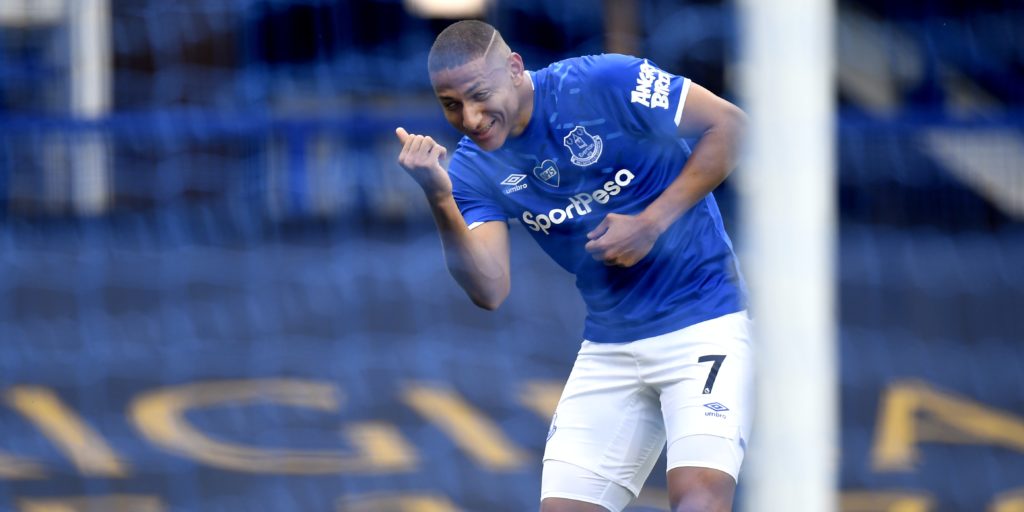 Brendan Rodgers’ side, third going into the game, have now not won in three since the league resumed.

Richarlison and Gylfi Sigurdsson struck early on as Leicester’s grip on a Champions League place was loosened yet further with a 2-1 defeat at Everton.

Kelechi Iheanacho gave the Foxes hope of arresting their damaging recent slump with a bizarre goal at Goodison Park but Everton held on for three Premier League points.

Brendan Rodgers’ side, third going into the game, have now not won in three since the league resumed and a fine season is in danger of fizzling out as the chasing pack close in.

They paid the price for a dreadful start as they were repeatedly caught by Everton breaks. James Maddison, only fit enough to start on the the bench after his recent hip injury, sparked a revival after the break but the visitors could not make all their late pressure count.

Everton took a firm grip on the game after just 10 minutes. Impressive teenager Anthony Gordon raced onto a header from Lucas Digne down the left and squared the ball for the onrushing Richarlison. The Brazilian made no mistake with a fierce shot from six yards that flew past Kasper Schmeichel.

Leicester almost found an instant reply when a Dennis Praet pass took an awkward deflection and worried Jordan Pickford but it rolled wide.

Everton doubled their lead with just 16 minutes gone when VAR awarded them a penalty. Digne swung the ball into the box and it appeared to strike the arm of Wilfred Ndidi as he got ahead of Michael Keane.

There was a lengthy stoppage as replays were studied numerous times but the decision finally went in Everton’s favour and Sigurdsson stroked home calmly from the spot.

Things might have got worse for Leicester but Çaglar Soyuncu did well to get back and deny Dominic Calvert-Lewin and James Justin also broke up another attack following an Alex Iwobi charge.

It was not until towards the end of the opening half that Leicester began to look comfortable but Pickford reacted quickly to deny Jonny Evans from close range after a Youri Tielemans effort was blocked.

Digne forced Schmeichel into a save with a deflected shot early in the second half but Leicester got themselves back into the game moments later.

Substitute Iheanacho got lucky but was rewarded for his persistence as he chased a ball into the box and Mason Holgate’s attempted clearance struck him on the head and went in.

With Maddison also off the bench and pulling the strings, Leicester turned up the pressure.

They were inches away from an equaliser when Pickford mishandled a cross in the drizzle and it rebounded off Keane towards goal but the defender recovered to clear off the line.

Pickford then had another moment of alarm to let in Iheanacho but the Nigerian fired over before forcing a save with another chance and Ben Chilwell volleyed over.