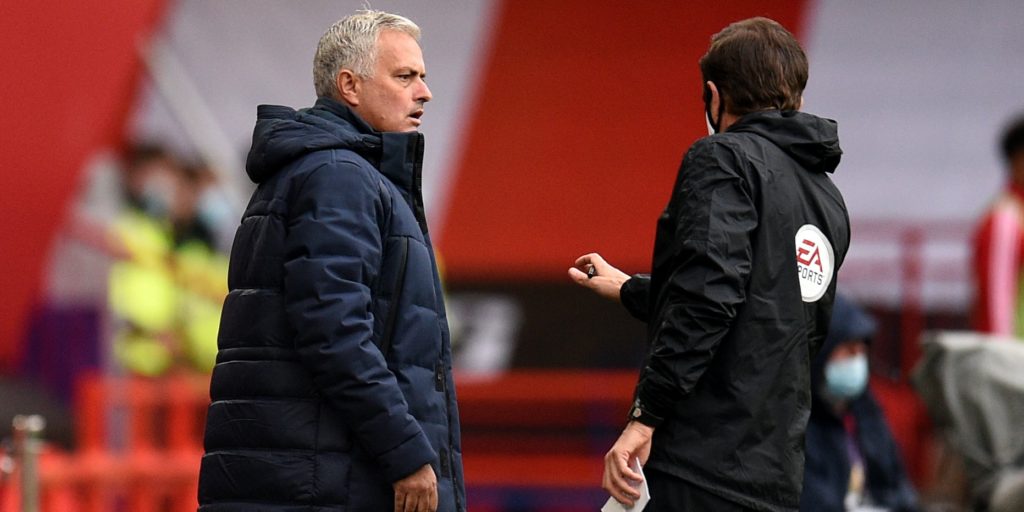 Chris Wilder was happy that a controversial call went Sheffield United’s way for once.

Tottenham head coach Jose Mourinho says he fears for the future of football after his side were on the wrong end of one of the most controversial VAR decisions of the season in a 3-1 loss at Sheffield United.

Spurs were trailing to Sander Berge’s opener when Harry Kane converted two minutes later, only for VAR referee Michael Oliver to spot a handball by Lucas Moura in the build-up.

Contact by Moura as he fell was minimal at best, but the goal was chalked off and Spurs were not even afforded a free-kick.

They let that sense of injustice affect them as the Blades regained their verve from earlier in the season, with Lys Mousset and Oli McBurnie adding further second-half goals.

Kane did get on the scoresheet at the death, but Spurs’ defeat leaves their Champions League hopes in tatters, sitting seven points off Wolves and Manchester United.

Mourinho fears that VAR and the people using it are ruining football.

“I cannot say anything because I’d be in trouble with the institutions and I want to protect myself and my club so I can’t be open as I’d like to be,” he said.

“Now, I can only say that normally I’m a professional guy on the bench in these moments, I never complain at the guy with the whistle because it’s not the referee any more.

“I think the referee should always be the man on the pitch and the people in the office should just support and assist.

“That’s not the way it is. The referee who is not very good on the pitch, we cannot expect that he’s good in the office. We’re going in a direction that’s really bad for the beautiful game, the game that everybody fell in love with.”

Spurs were by far the better team until that moment, but let it affect them and Mourinho said he found out about the character of his team.

“We have to do better, we have to be mentally stronger to cope with what happened during the game. We cannot mentally die after Michael Oliver’s decision.

“I know that it’s very difficult to take, the players around the situation know what happened and what didn’t, you celebrate and feel the goal.

“I know that kick it our teeth but with 50 minutes to go we have to be stronger. That’s my criticism to my team in the second half, in spite of trying.

“Now I know more the profile of my players. I felt it. I feared that in the second half we wouldn’t be strong enough to cope with a team that when they’re winning just defends and counter-attacks.”

The Blades were full value for their three points, the first of the Premier League return after two defeats and a draw, which enhance their European ambitions.

Chris Wilder’s men have been on the wrong end of some VAR controversies of their own, so the Blades boss is not going to lose any sleep over Kane’s disallowed goal.

“I have got a back catalogue of decisions that have gone against us, we are the unofficial champions of Europe on VAR decisions going against us.

“I can understand their manager’s frustrations I would be super frustrated. It’s a nonsense rule, it wasn’t intentional.

“There is a difference when the ball moves. These rules are in place, I totally understand the frustration of the manager and his players. We have had the rub of the green tonight on that one, we are well overdue, but we will take it.”