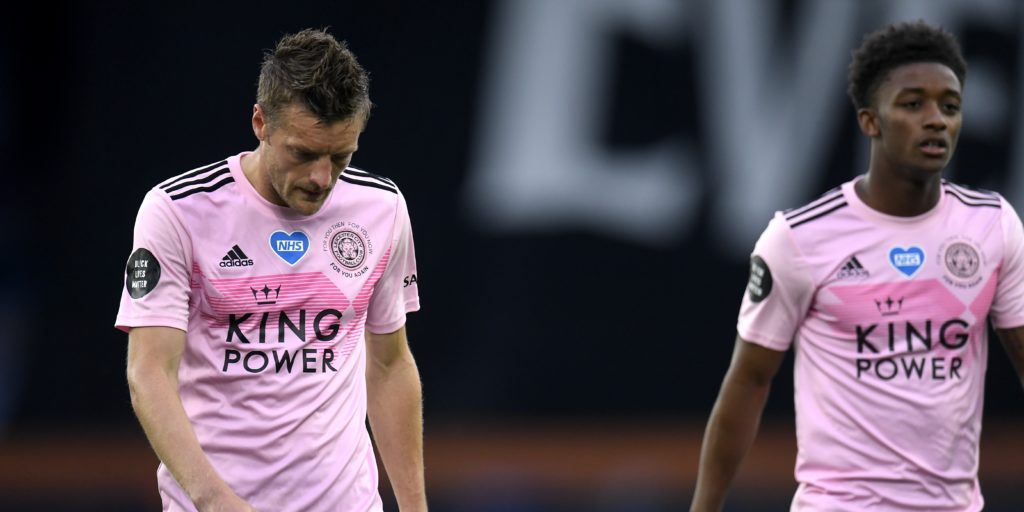 Leicester stumbled again with a 2-1 loss at Everton.

The Foxes remain third in the Premier League but are fading fast, their recent slump continuing with a 2-1 loss at Everton on Wednesday.

Rodgers’ side have claimed just two points from their three games since competition resumed.

They were fortunate fourth-placed Chelsea failed to take advantage of their latest slip-up, also losing on Wednesday, but in-form Manchester United and Wolves are now just three points behind with six to play.

Leicester boss Rodgers said: “I know we have a very young group, a young squad that is developing, but if you want to consistently compete at the very top end of this table it is a mindset.

“I think we have shown over the course of the season we have got the talent but there is no doubt that we have to have a reset mentally if we are going to go and achieve what we want to achieve.

“Thankfully we are still in a fantastic position but we have got to try to sustain that. At this end of the season it’s really about coping with that and that is something I need to help them do.

“We have been terrific for a lot of the season. Our level has been high and somehow we need to work our way back to that.”

Leicester paid the price for a poor start at Goodison Park. Everton took the lead after 10 minutes when impressive youngster Anthony Gordon broke into the box on the left and teed up Richarlison in front of goal.

Glyfi Sigurdsson added the second from the penalty spot after Wilfred Ndidi was penalised for handball following a lengthy VAR review.

With James Maddison, who was not fit enough to start, coming off the bench, Leicester improved after the break. Kelechi Iheanacho fortuitously pulled one back when a clearance rebounded in off him but the visitors could not find an equaliser despite applying plenty of pressure.

For Everton it was a result that maintained their late charge for a Europa League spot. With seven points from their last three games, Carlo Ancelotti’s side have seventh place in their sights.

“It was a massive statement,” said Keane, who had to make one hasty goal-line clearance after goalkeeper Jordan Pickford allowed the ball to slip through his grasp.

“We want to get into Europe and this was a must-win.

“Everyone defended well and worked really hard. We had a few nice patches but we know we can play better.

“I don’t think we showed our full quality on the ball.

“But the game was all about the result and we’ll take that all day.”