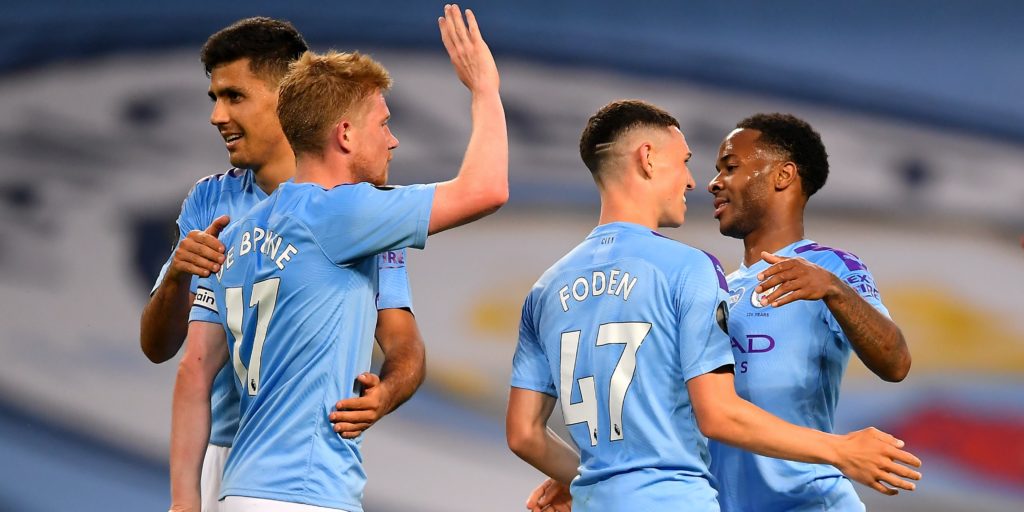 The hosts gave their visitors a guard of honour before cruising to victory.

Here, the PA news agency looks at some of the game’s talking points.

Much was made of the ousted champions, on their own ground, having to applaud the new ones as they entered the pitch. In truth, without fans inside it was not much of an occasion. Liverpool’s players looked slightly awkward as they walked out, while City’s squad could not wait to break ranks and dump their tracksuit tops on the bench. Liverpool’s coronation was not taken so well outside the stadium, where one fan in the middle of the road halted the Reds’ team coach on its way to the ground.

The pair had a confrontation in the first fixture at Anfield, which led to something of a dust-up when the players got together on England duty a couple of days later. Sterling drew first blood on the resumption of their personal duel at the Etihad, forcing Gomez to pull him down for De Bruyne’s penalty. He then cut inside to shoot through Gomez’s legs for City’s second and leave the Liverpool defender somewhat frazzled. The centre-back was replaced at half-time.

The Belgium international scored the opener from the penalty spot, his first goal against Liverpool in 10 appearances against them, but it was his general menace which caused Liverpool problems. He played as a number 10 but had free reign to go where – and do what – he wanted. And, after Gabriel Jesus wasted one brilliant defence-splitting ball, Phil Foden did not make the same mistake from a De Bruyne pass for the third just before half-time. He was less devastating but just as effective after the break, with his pass leading to City’s fourth goal.

Away day blues continue for Reds

Jurgen Klopp’s side have now gone five away games in all competitions without scoring – their worst run since April 1992. They were a long way from their clinical best up front, with Roberto Firmino particularly off the pace. Even Sadio Mane and Mohamed Salah, with 40 goals between them, failed to present Ederson with anything resembling a genuine test. The closest they came was when Salah hit the post in the first half with the score at 0-0.

Manchester City youngster Phil Foden has scored or assisted in every game since the restart. At the Etihad he scored and assisted in the same match for the first time in the Premier League, becoming the youngest player to do so against Liverpool in the competition. The 20-year-old cleverly found pockets of space on City’s right, giving Reds left-back Andy Robertson one of his most difficult nights of the season. He then showed his versatility by switching to the left and then up front.