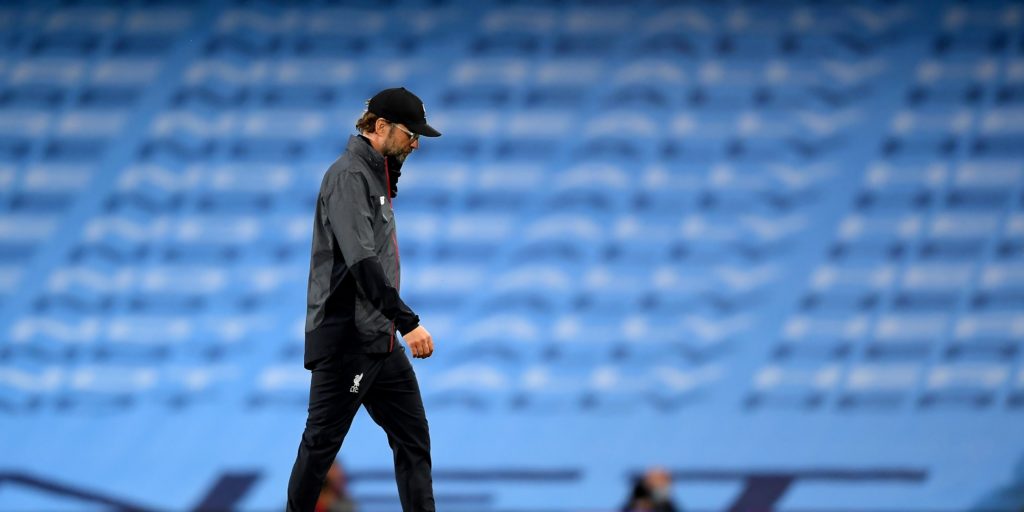 Fresh from sealing the Premier League title, Liverpool were thrashed 4-0 by Manchester City.

Jurgen Klopp refused to blame a title hangover after his Liverpool side were thrashed 4-0 by Manchester City in their first match as champions.

The Reds endured a sobering return to action as City, the side whose Premier League crown they took last week, served a ruthless reminder of their enduring quality at the Etihad Stadium on Thursday.

The outstanding Kevin De Bruyne began the rout from the penalty spot before further goals from the equally impressive Raheem Sterling and Phil Foden before half-time. An own goal from Alex Oxlade-Chamberlain completed the scoring.

After finally ending a 30-year title drought and losing just one other match all season, Liverpool could perhaps be excused an off-night.

But manager Klopp insisted his side were still on top of their game.

“It has nothing to do with last week. It hurts like defeats hurt,” he said.

“What I wanted to see was who is ready to fight against Man City, who obviously had a point to prove. It was easy motivation for Pep.

“We were in the game, we were fighting, we were running. We did everything we could. Was it perfect? No. The problem is if you are not perfect and meet Man City, then you lose, and the result can be not so nice.

“If there is a team in the world that can smash us like this it is probably City, but we will come again.”

After receiving a guard of honour from City, Liverpool started well and hit the post through Mohamed Salah.

But City dominated after De Bruyne’s 25th-minute penalty, making light of what had been a 23-point gap between the sides prior to the game.

“If anyone thought before the game that the quality gap between City and Liverpool is 20 or 23 points I cannot help these people,” Klopp said.

The title might be gone but, for City, there is still much to play for this season.

Manager Pep Guardiola remains as demanding as ever and wants to keep his side sharp as they bid to retain the FA Cup and, in August, challenge for the Champions League.

Guardiola also dismissed suggestions Liverpool had overdone the celebrations, instead praising his team.

“I’m delighted. Congratulations to the team, we beat the champions with the quality they have,” he said.

“They didn’t come here to celebrate. They’d drunk enough beers and they came here to compete.

“So the chances we created, to beat them 4-0, it was so important for preparing against Arsenal and Real Madrid.”