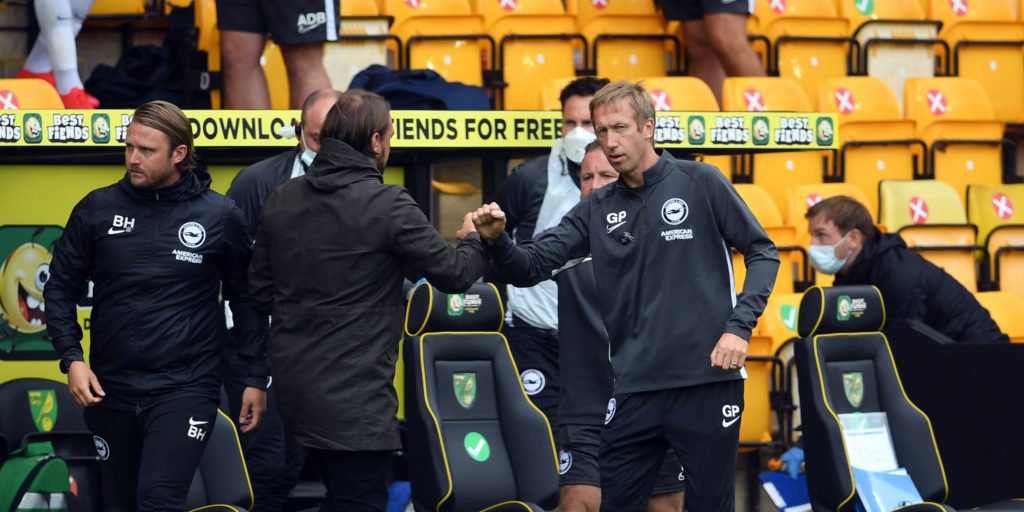 Brighton manager Graham Potter has backed Norwich counterpart Daniel Farke to bounce back after a difficult first season in the Premier League.

The duo enjoyed battles in the Sky Bet Championship during Potter’s time at Swansea and the respect between the pair remains high after they both made the step up to the top flight for this campaign.

While Potter has led Brighton to safety, Norwich are on the verge of relegation after they were beaten by the Seagulls on Saturday to make it five consecutive defeats since football’s resumption following the coronavirus pandemic.

It has been a baptism of fire for the Carrow Road club and their German manager, although not without various memorable moments, including beating then-champions Manchester City in September.

Potter said: “It’s hard for me to comment on Norwich’s season. From the outside they’ve had injuries at key moments which has destabilised them.

“You can see the quality and I have a lot of respect for them because I know how good they were in the Championship.

“Daniel is a really good coach, a top coach and he’ll stick with what he does and learn and improve like we all have to.

“I am sure he will come back stronger from this experience.”

Brighton’s victory moved them on to 36 points, equalling their tally from the 2018/19 season under Chris Hughton.

With five games left, the Sussex outfit have little to play for now they are safe, but Potter will not let them relax, especially ahead of home clashes with Liverpool and City coming up.

He added: “Our players are sensible people, they know not to listen to external noise and outside predictions.

“With behind-closed-doors and everything else, anything can happen (in games). We need to enjoy this result because it’s a massive three points, but stay humble.”

Norwich are left with only pride to play for unless they can overturn a seven-point deficit from their remaining fixtures against Watford, West Ham, Chelsea, Burnley and Manchester City.

And Farke wants them to make the fans proud, adding: “In general it is for each and every player also a chance to show how much it means to them to wear the yellow shirt, especially in such a tough time.

“Without any doubt and at some point we will try some things for the future because it will be a short summer break and pre-season will be a different group of players probably.

“It’s not like we give away gifts right now just to try, so each and every player will have the chance to present themselves and I am professional. I will go with the line-up which is possibly the most successful line-up that I have in order to attack and win the games.”