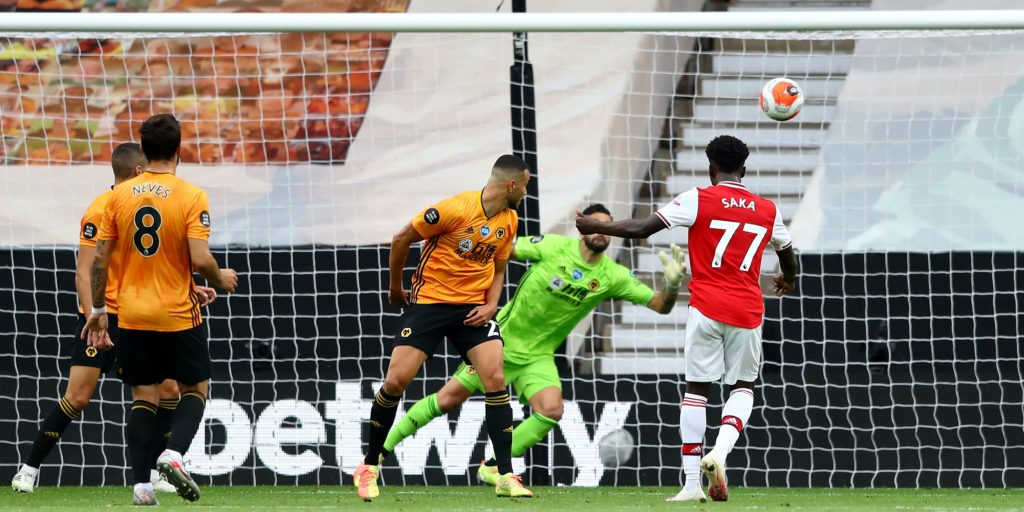 Bukayo Saka has urged Arsenal to keep their cool in the race for European qualification.

The 18-year-old scored his first Premier League goal in the Gunners’ impressive 2-0 win at European rivals Wolves on Saturday.

Manager Mikel Arteta admitted afterwards there was no room for error and Saka, who penned a new long-term deal at the Emirates this month, refused to get caught up in European talk.

“We’re just taking each game by each game because we know how important every point is at this stage,” he told arsenal.com

“We’re trying to win every game we can, take each game slowly and we’re just so happy to get the win because we know how much it means in terms of the table and the position we finish.

“We play this competition so much. This competition is probably the one that means the most to us right now so I’m just so happy to get the goal and help my team get the win.”

Saka opened the scoring two minutes before the break when he hooked in Kieran Tierney’s deflected cross.

Alexandre Lacazette made it 2-0 late on, firing in off the post, as Wolves’ Champions League hopes suffered a blow.

Adama Traore missed their best chance when he chipped over with just goalkeeper Emi Martinez to beat in the second half.

The winger conceded Arsenal’s ruthless streak at Molineux was the difference.

“We fought until the end, we had a couple of chances, they scored, and I think we missed a few things in the game,” he told the club’s official site.

“We did have the chances and we didn’t score them, me personally, but it is what it is. We have to keep working and we will keep working so next time we can put them in.

“I think it was a close game but the difference was they scored and we didn’t.

“I had a chance one-v-one with the keeper and I didn’t score. But, like I say, we will keep working, we will be more clinical and this is the difference between the best teams – they have one or two chances and they score.”