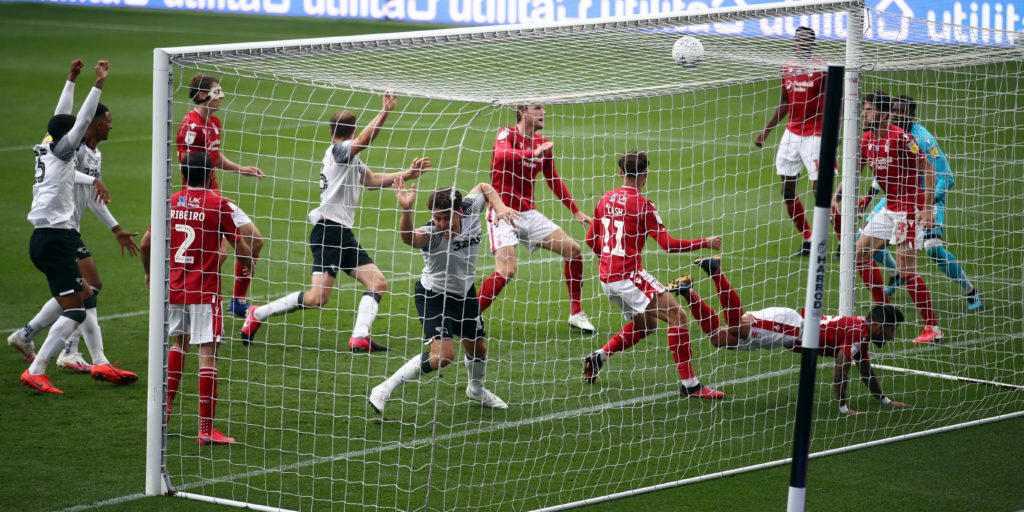 Chris Martin grabbed a dramatic stoppage-time goal to earn Derby a precious point in a 1-1 draw with rivals Nottingham Forest.

Joe Lolley’s 10th goal of the season looked to have won it, but – after Martyn Waghorn was sent off moments earlier – Forest failed to deal with a free-kick and Martin pounced.

It was a pulsating end to a game which had barely simmered throughout and dents Forest’s hopes of automatic promotion, while Derby are very much in the play-off race.

Derby had the first real opening in the fourth minute, when Forest gave the ball away allowing Duane Holmes to burst forward, but his cross sailed over everyone.

Forest opened the scoring in the 12th minute, when Lolley came inside and bent a low shot from 20 yards in off Ben Hamer’s right-hand post.

Derby looked to respond immediately and Martin knocked the ball down for Louie Sibley, who flashed a shot wide. The midfielder then had another effort blocked following a long throw.

There was more urgency about Derby after the first drinks break and Jayden Bogle whipped in a cross that Martin headed over in the 29th minute.

There was another scare for Forest in the 34th minute, when Brice Samba fumbled a deflected Craig Forsyth cross but Joe Worrall was able to clear.

Sibley’s pace and skill took him into the box in the 42nd minute to set up Max Bird, but he was surrounded by red shirts and his shot was blocked.

It was a strong finish to the first half by Derby and they began the second on the front foot, with Forest penned in their own half.

Bogle shot wide after a Sibley knock down in the 63rd minute, but Forest then broke out for the first time, with Hamer turning behind Ben Watson’s skimming drive.

Hamer pushed away another Lolley shot, but the home side went close when Sibley’s cross was deflected behind.

Forest broke upfield with Sammy Ameobi setting up Lewis Grabban, who shot just over. The striker then played in Tiago Silva, who rattled a post with Hamer motionless in the 74th minute.

Derby had their first effort on target two minutes later, when Martin’s low shot was held by Samba.

Grabban wasted a great chance to seal it in the 78th minute as he blazed over from 10 yards.

Waghorn was shown a red card in stoppage time for a dangerous challenge on Ryan Yates, but there was still time for a dramatic equaliser in the seventh additional minute, when Martin bundled the ball in after Samba fumbled a free-kick.