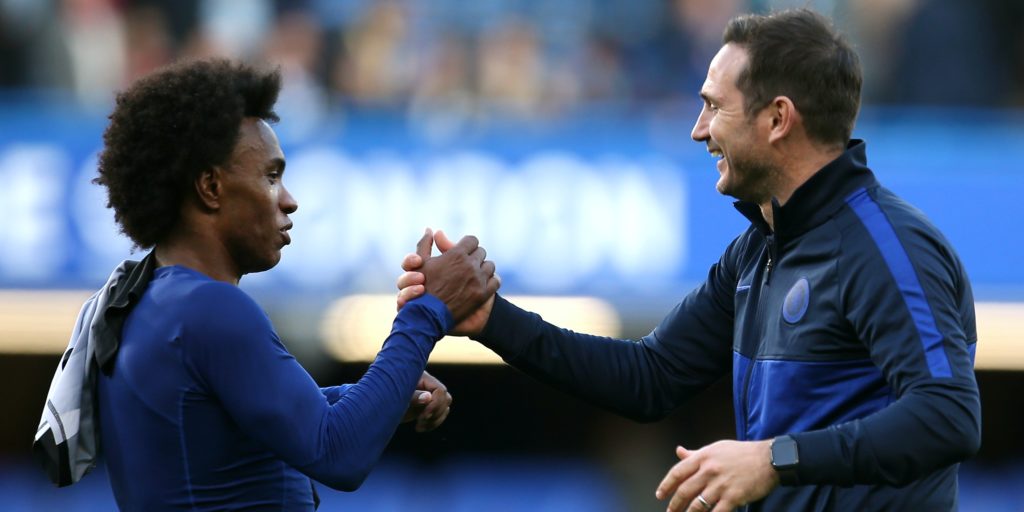 The Blues boss revealed he still hopes the Brazil winger will sign new terms, to add to the seven years he has already spent in west London.

The 31-year-old fired a penalty and a fine free-kick in the Blues’ 3-2 Premier League loss at West Ham on Wednesday night, with manager Lampard convinced the 70-cap forward merits a new deal.

Willian is understood to have been holding out for three-year terms, with Chelsea previously offering him two more seasons at Stamford Bridge.

Asked for the latest update on Willian’s status ahead of Chelsea’s clash with Watford on Saturday, Lampard said: “I haven’t given up hope on it, the club is still in discussions with him.

“We want him to stay at the club. But I also appreciate the fact that this contract for Willian is a big deal for him because of his age and where he’s at.

“I’ve been there before myself and I respect that. But the way he’s playing at the minute shows his worth to the squad and the group and it’s something that I hope we can get to.

“Whatever way with Willian he’s been a great servant to the club and if we can get it I will be happy. If not I will certainly wish him well because I’ve got a lot of time for him as a player.

“In the short term we can see what he’s doing for us. It’s ongoing.”

Chelsea have already stolen a march on close-season recruitment by securing Timo Werner from RB Leipzig and Hakim Ziyech from Ajax.

The Blues’ defensive woes were glaring again in the loss at West Ham, leaving Lampard to admit Chelsea’s lack of height causes them problems.

Chelsea have been linked with a move for West Ham’s Declan Rice, with a view to deploying the England star at centre-back.

But Lampard’s latest comments hint at the craving for a genuine powerhouse and defensive cornerstone.

“When we came into the club we looked at the stats from last season.

“Last season, we were bottom of the league defending set-plays, in terms of teams getting big chances against us, and second bottom in attacking.

“So we looked at that. It’s not just a reference to last season because we haven’t improved much this year.

“If you look at personnel, and I really don’t like to talk about my own playing days, but we didn’t work much at all on set-pieces, certain managers more than others, and there were a few reasons – mainly John Terry, Gary Cahill, Didier Drogba, Michael Ballack and Branislav Ivanovic.

“So you’d stick it in an area and they would defend it or score goals.

“Similarly with Liverpool, I remember a lot of talk about them and set-pieces a few seasons ago. They were zonal and conceding a lot.

“They signed Virgil Van Dijk and he heads out everything that comes in the box. So there’s a huge relation to personnel.

“And if you don’t have that size across the team, the main thing is trying to compete as hard as you can and making it difficult for other teams to score.

“But there’s no doubt and I’m not making excuses because we haven’t done that well enough on the pitch and that has to improve.

“When you look at who you might bring in with the balance of the squad, in the modern day, it is certainly something to take into account when you’re looking at recruitment.”