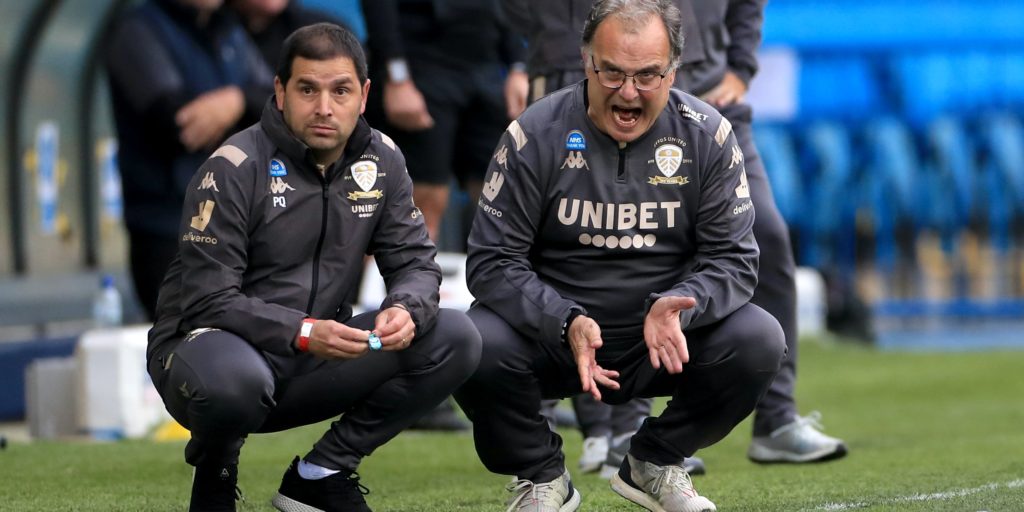 Bielsa’s side ticked off their latest challenge as they close in on a Premier League return.

Marcelo Bielsa admitted to feeling the pressure as Leeds moved a step closer to a Premier League return with a 3-1 win over Blackburn at Ewood Park.

Patrick Bamford and Kalvin Phillips scored in the first half to put Leeds in control before Mateusz Klich added a third shortly after Adam Armstrong pulled one back at the start of the second half.

The win moves Leeds four points clear at the top of the Championship before West Brom face Hull on Sunday, and keeps them six clear of third-placed Brentford with five games to go.

But though his team ultimately looked comfortable on the pitch, Bielsa was an often agitated figure on the Ewood Park sidelines, eager to avoid a repeat of last season’s collapse when Leeds failed to win any of their final four matches to blow automatic promotion before losing in the play-offs.

“Yes,” Bielsa said when asked if he had felt anxious during the match. “Every match in this period is very important, and every distraction can be very important.

“If we get distracted we will pay for that so we need to keep focused in every match.”

Bielsa had come out of a midweek draw with Luton frustrated by his side’s profligacy in front of goal, but there was no such problem here as Bamford dispatched their first chance of the game after Klich dispossessed Lewis Travis.

After Phillips’ superb free-kick, his first goal since October, doubled the lead five minutes before half-time, Klich starred again as he scored on the rebound when Jack Harrison’s 53rd-minute shot was blocked, extinguishing hopes of a Blackburn fightback sparked by Armstrong’s free-kick.

“He played a great match today,” Bielsa said of Klich. “He was the player who balanced the whole team.”

Though Leeds went in at the break 2-0 up it could easily have been very different as both sides hit a post, and Bielsa admitted Blackburn had given his side problems before a more comfortable second half.

“It was very difficult to imagine which kind of match we were going to have,” Bielsa said.

“The opponent was playing with different shapes today, and they made some modifications we didn’t expect with (Sam Gallagher) on the right, (Joe Rothwell) on the left and (Armstrong) as the centre forward. That was new today.”

But Tony Mowbray’s innovations were not enough to prevent a third loss in a row for Blackburn on the back of defeats against Wigan and Barnsley.

“I think we made a game of it in the first half particularly,” Mowbray said. “Obviously we missed a one-on-one and hit the post and they scored at strange times, just as we were getting back in the game…

“They come with an attitude that they believe they’re going to win football matches. They’ve got very good players and they spend a lot of time in your box. I think their right-back was in our box 100 times today, but I don’t think the gap was massive.”

Blackburn were on the cusp of the play-offs when the season resumed, but their poor run has seen the gap grow to eight points with five games left.

“Nobody has wanted the last three games to peter out but it’s football after lockdown, it is what it is,” Mowbray said.

“The players are trying hard enough, they just haven’t taken some chances. I won’t lose faith that we’ve got good players.”