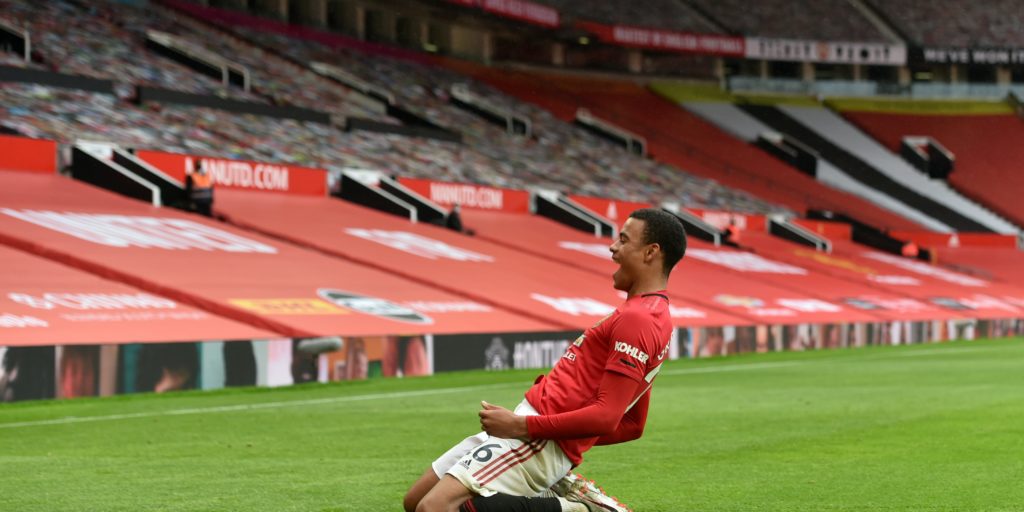 United extended their unbeaten run to 16 matches in all competitions.

Saturday afternoon’s clash between Eddie Howe’s embattled Cherries and the roaring Reds looked like a complete mismatch, but the hosts had to dig deep and show character on an afternoon that ended in a superb victory.

It was the kind of match when the absence of supporters was particularly keenly felt, with United extending their unbeaten run to a 16th match in all competitions as they hit five at home in a Premier League game for the first since December 2011.

Bournemouth had threatened an upset as Stanislas nutmegged Harry Maguire and beat David De Gea at the near post to open the scoring, only for United to kick on and go into the break 3-1 up.

Rashford’s spot-kick, a thumping Greenwood strike and sumptuous curling Martial effort was cut back early in the second half as King converted a controversially-awarded penalty.

But Solskjaer’s side put their foot on the gas. Greenwood thumped home his second of the afternoon and Fernandes fired in a free-kick as Bournemouth’s relegation fears increased.

It was an impressive performance by United, who could have gone ahead in the 10th minute when Fernandes was put through and continued to lift the ball over Aaron Ramsdale and the goalframe.

Bournemouth looked set for a long afternoon, only for Stanislas to provide a surprise injection of hope. United failed to deal with a cross and Stanislas bamboozled Maguire by popping the ball through his legs, before lashing past De Gea.

But that goal merely prodded the United beast, with a Rashford free-kick saved by Ramsdale and Solskjaer’s team upping the ante after the drinks break.

The leveller arrived in the 29th minute as Rashford cut back and Fernandes heeded Greenwood’s yelp of “Bruno”, with the forward collecting the pass and hitting a fizzing shot that was too hot to handle.

United kept their foot on Bournemouth’s throat and referee Mike Dean had no hesitation pointing to the spot when Adam Smith handled, with Rashford rather than Fernandes stepping up to slot home the penalty.

Ramsdale was close to stopping that but had no chance when Martial took aim from the edge of the box in stoppage time, arcing a beautiful strike into the top corner.

Yet United would be quickly knocked out of cruise control when the second half got under way.

Howe’s side started on the front foot as De Gea denied Lewis Cook before substitute Arnaut Danjuma hit the near post after some slapstick defending.

That theme continued as half-time introduction Eric Bailly raised his arm to control a backpass and, following a lengthy delay, video assistant referee Lee Mason made the contentious decision to award a penalty for handball.

King made no mistake with the penalty and Danjuma saw an equaliser ruled out for offside soon after, but United rallied rather than wilted.

Bournemouth did not help themselves as their inability to clear their lines was lapped up by Greenwood, who edged wide and unleashed another emphatic finish past Ramsdale in the 54th minute.

United grabbed a fifth of the afternoon within five minutes. Lloyd Kelly fouled Martial on the edge of the box and Fernandes fired home to put the result to bed.

The VAR checked that decision and the tightest of offside calls saw Rashford denied his second of the day soon after, with the drinks break giving the Cherries some welcome respite.

Nathan Ake threw himself in front of a Martial strike as United pushed for more, with Ramsdale denying Luke Shaw, Paul Pogba, Fernandes and Fred to prevent matters getting worse.