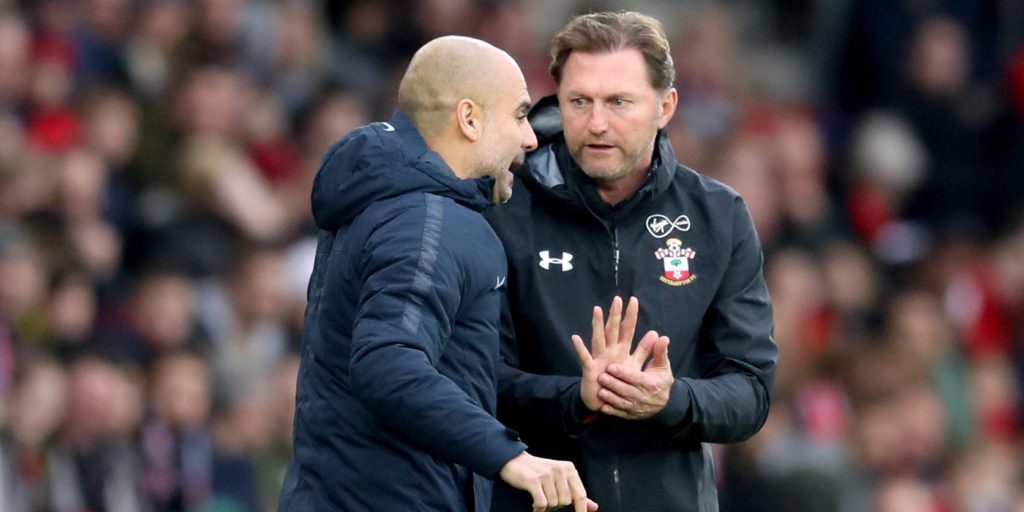 Millions of extra viewers are expected as the BBC broadcasts just their second ever Premier League match.

Southampton’s uphill battle to end their wretched home form against Manchester City faces becoming even harder with Ralph Hasenhuttl dealing with a string of injury issues.

Saints have made a promising return from the coronavirus suspension, with thumping wins at Norwich and Watford coming either side of the avoidable 2-0 loss at St Mary’s to Arsenal.

That defeat extended the league’s worst home record and Manchester City’s stunning victory against champions Liverpool on Thursday night suggests Southampton will have their work cut out on Sunday.

Millions of extra viewers are expected as the BBC broadcasts just their second ever Premier League match, so Hasenhuttl could do without the injury problems that are beginning to bite.

“It’s a good topic to speak about, eh?” the Saints boss said with a laugh when their wretched home record was mentioned. “It’s quite likely that it stays the same.

“It’s definitely not the easiest home game to have against Man City, but, yeah, we start, we go in this stadium, we definitely come and we definitely want to play this game, that’s right.

“We have a few problems, still with Pierre (Emile Hojbjerg) and also Sofiane (Boufal) is not available for the weekend.

“We have Jannik Vestergaard with a few problems with muscle injuries.

“Yan Valery also has problems, Nathan Tella, so we have a few guys now after the last game also with a few problems through the week.

“Busy time but we must see who is available for the weekend.”

Tella is the least concerning of the potential absentees having only made his debut off the bench late in the 3-0 win at Norwich, but the 20-year-old is highly thought of and signed a new deal until 2023 on Thursday.

“He is one of the young guys, the young lads, that we want to develop,” Hasenhuttl said.

“When he shows the character he showed so far, he’s open-minded, wants to learn, invests a lot on the pitch, he can be quite an interesting striker because he can play the striker or the number 10.

“He’s good on the ball, he has good solutions with the ball and, yeah, he is one of the young guys who want to push in the future.”

While Hasenhuttl faces being without several key players, centre-back Jack Stephens is back after a one-game ban following his sending off against Arsenal.

Moussa Djenepo is also set to finally make his return, having served a three-match suspension for his red card against Newcastle in March – the final fixture before the coronavirus suspension.

“It was a tough time for him, I think, definitely,” Hasenhuttl said. “This three-game ban was hard for him and it’s very long ago that he played the last game.

“So I’m happy to have him back on the bench. It can be quite likely that he has sub in at the weekend, so I’m happy that he’s back.

“It’s for him also very important because when you’re that long out of the game it’s never nice.”

Djenepo has settled into life at St Mary’s better than fellow wideman Mohamed Elyounoussi, who was farmed out to Celtic for the 2019-20 season after an inauspicious first year at the club.

The Norway international this week agreed a deal to keep him at the perennial Scottish champions for a further season, but goalkeeper Fraser Forster’s future is more uncertain after shining on loan with Neil Lennon’s men.

“We have not decided what we do next season with our plans in this direction,” Hasenhuttl said when asked about Forster.

“Of our loan players, some did a very good job there and it’s also clear that loan players don’t want to go again on loan.

“Normally they want to go permanently somewhere and we will find the right solution for every player in the summer.

“When the right moment is to discuss it, then we do it.”