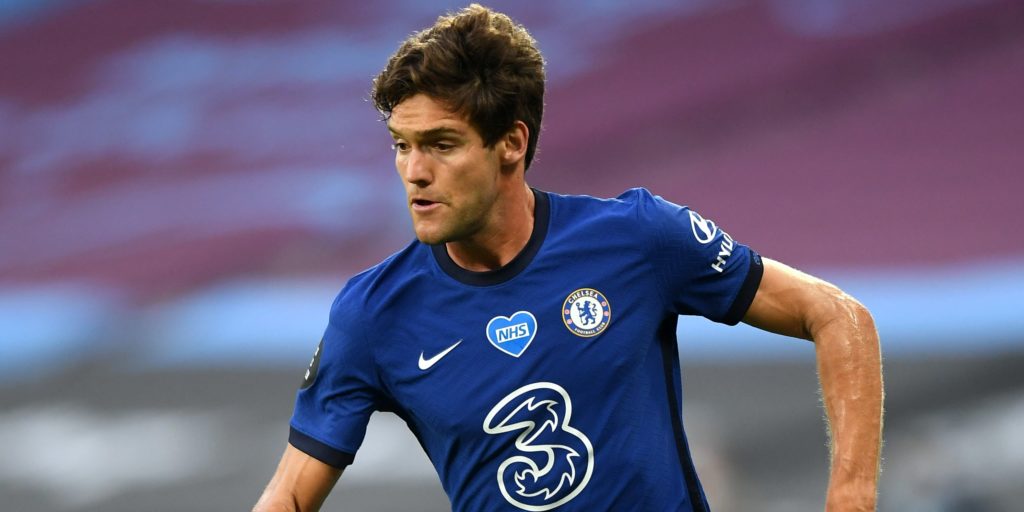 Chelsea boss has no complaints about the season-long contributions of his players.

Former England full-back Neville claimed Alonso “cost Chelsea the game” in failing to track back ahead of Andriy Yarmolenko’s last-gasp strike as West Ham sunk the Blues 3-2 in the Premier League on Wednesday.

Chelsea have long been linked with a summer raid on Leicester for England left-back Ben Chilwell but Lampard has insisted Alonso must not be singled out for blame from the shock London Stadium defeat.

“It’s much easier to comment from afar,” said Lampard, of Neville’s criticism of Alonso.

“We do try to play football, we try to be progressive, but of course we don’t do that at the idea of wanting to concede goals. And recovery runs are a huge part of football, and the players must do them whether it’s the first or the 90th minute.

“I don’t think it’s maybe quite fair to just look at Marcos in that isolated incident.

“Yes, he can recover and we can recover better as a team, but that has to be something fundamental to the team.

“You have to run backwards as much as you run forwards. And you have to have that desire to make difficult runs, sometimes they are sideways runs, whatever it is.

“But I can’t complain about the players and their desire here this season.

“When you isolate one goal that’s so crucial because it wins the points, fair enough, but I know with my players generally we have the desire to press very well off the ball and when it goes beyond us generally to recover and get there.

“And it was a game where we slipped up, and not just that mistake, other mistakes, and we lost the game for it.”

Willian’s penalty and a fine free-kick had Chelsea expecting to grind to a shaky draw against the Hammers, who had Tomas Soucek and Michail Antonio on target.

Soucek had already seen a goal chalked off after a Video Assistant Referee (VAR) review, but David Moyes’ side battled back and Yarmolenko stole the victory at the end.

Former Manchester United star Neville hit out at Alonso on Sky Sports, saying: “You see Yarmolenko is back there with Alonso.

Lampard insisted he has not spoken to Alonso about Neville’s criticism, preferring instead to pick apart Chelsea’s wider defensive frailities.

“I haven’t spoken to him about it, and I think it’s a dangerous game to comment on every pundit, because you’d probably have to have conversations with all your players every week,” said Lampard.

“That’s the nature of the beast and what we do. Yes, if I felt that a player needed help or support in those situations I would do.

“But I think we as ourselves, as players, and myself as my job, we’re probably the biggest critics.

“We analyse games, we go over them, we talk with the players individually and collectively, and that’s my main focus, not so much what comes from outside.”

Chelsea’s defeat at West Ham ended a run of four successive Premier League victories and leaves Lampard’s men itching to get back to winning ways against Watford at Stamford Bridge on Saturday.

Lampard challenged his players to restore the mentality that underpinned the good run that preceded Wednesday’s lacklustre loss.

“Every game now is going to be tough,” said Lampard.

“If we go into it with the right attitude that we approached games like Aston Villa and Manchester City, and Everton and Liverpool before the break, then I have real belief in us.

“It’s about getting our mentality right, keeping freshness in the players between games and having a real desire to achieve want we want.”