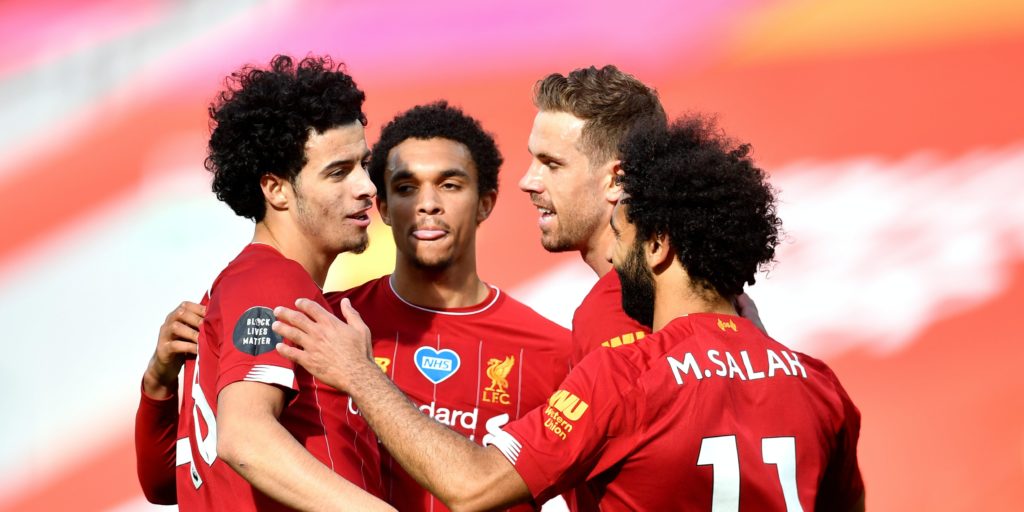 Jones came off the bench to score the second in a 2-0 win over Aston Villa.

The 19-year-old, who grew up in Toxteth like another club favourite Robbie Fowler, came off the bench to score the second in a 2-0 win over Aston Villa.

After extending his decade-long association with the Reds the day before, the only downside to a whirlwind 48 hours was that no fans were present to witness the completion of every local lad’s dream of a goal in front of the Kop.

But Jones, who scored a brilliant winner at the other end to knock Merseyside rivals Everton out of the FA Cup in January, is already looking to his future.

“They could call it perfect but, for me, I’m just grateful for the manager and the rest of the staff for having the belief in me and putting me out there when it was only 1-0 and Villa were playing well,” he told liverpoolfc.com.

“But it’s been a good week. He (Jurgen Klopp) was just saying the usual, he knows that I’m good on the ball but it’s about picking the right pass and knowing when to dribble.

“He said… just to try and get a hold of the game by the scruff of the neck and control the game a bit more.

“That’s what I tried to do and hopefully the goal helped.

Klopp has included Jones and fellow youngsters Neco Williams and Harvey Elliott in his squad since the new restart regulations allowed for extra substitutions.

It appears all will get more chances before the end of the season when the timing is right for Klopp.

“They are all good enough,” said the manager.

“It was really hard when you bring on Curtis and – only for a minute – Neco and Harvey is sitting there and you’re thinking ‘wow’, because he is incredible in training already.

“When the boys are the right choice in that moment they will play, but they will not play just because they are young.”

Liverpool post-Premier League coronation have, so far, been a pale imitation of the side who have established a 23-point advantage at the top of the table and won the title in record time in terms of matches remaining.

Having lost 4-0 at Manchester City they laboured for 71 minutes against relegation-threatened Villa before, as he has done so many times already this season, Sadio Mane struck the crucial breakthrough which was followed by Jones’ late strike.

Defender Andy Robertson admits they have struggled to reproduce their best form but believes the Villa game demonstrated another important quality which helped them secure a first title in 30 years.

“That’s why we are champions…when sometimes times are tough we dig even deeper; some teams might have been thinking, ‘OK, it’s not our day’ in the first half,” he told the club’s website.

“I didn’t think we played badly but they put up a good defensive block, they had a couple of chances themselves and some teams crumble under that – not us.

Villa boss Dean Smith tried to put a brave face on it but he knew they squandered a great chance to ease their relegation worries.

“The positives are we out-shot them on attempts on goal and they just showed that quality you need,” said Smith, whose side are still a point from safety having not won in nine matches.

“Not every game of the last five will be against the quality of Liverpool.

“Our game plans have been decent in the games we have played.

“We haven’t got the points tally we deserve after Project Restart – it is points we are fighting for and I don’t want to be a valiant loser.”