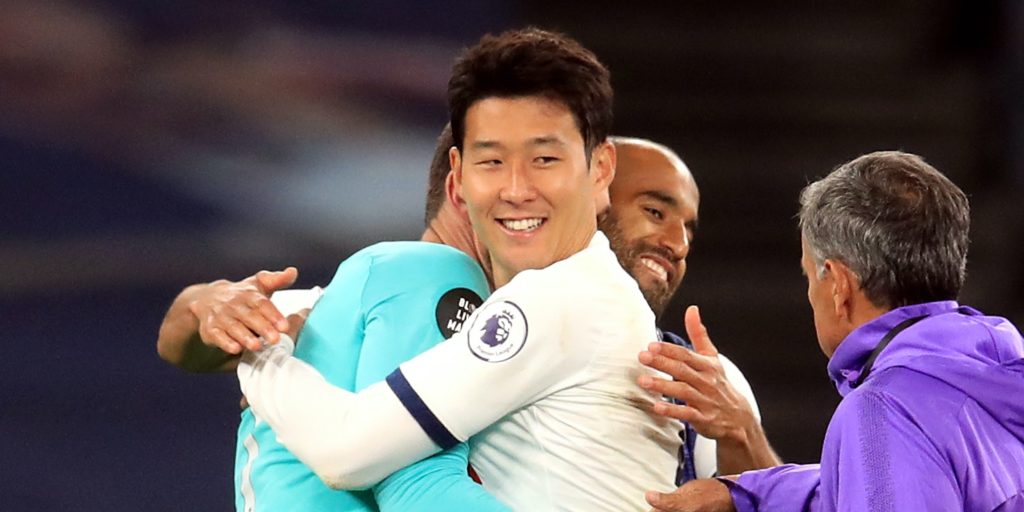 The Spurs goalkeeper appeared angry at Son’s perceived lack of effort in a half-time row which involved pushing and shoving.

Tottenham captain Hugo Lloris played down his half-time row with Son Heung-min after the 1-0 win over Everton.

Tensions were high at the Tottenham Hotspur Stadium as Lloris and Son were involved in a heated exchange which involved pushing and shoving, and they had to be separated by team-mates.

France goalkeeper Lloris appeared angry at Son’s perceived lack of effort, but the pair were later seen hugging at the start of the second half and again at full-time.

Lloris told Sky Sports: “It just belongs to the changing room. Outside you can say whatever you want. What happened is just part of football sometimes.

“There is no problem at all, you could see after the game we were fine. I think to concede a chance a few seconds before half-time because we didn’t make a press annoyed me but yeah, that’s football.”

Spurs did at least bounce back from their disappointing defeat by Sheffield United last time out thanks to Michael Keane’s 24th-minute own goal.

Lloris added: “In terms of personal investment it was much better than the last game. We don’t have the right to lose more points, it’s important to have a run. Tonight 1-0 is enough, we kept a clean sheet and made the effort together.

“Let’s be honest, we are in a situation we are not happy with so we have to fight, to make sure we all go in the same direction. It’s not our best season but we have to finish as high as we can. Now we have to move on as a team and that’s the most important thing.

“We are in a situation where we need to fight. We are not happy to be in this position. Most important is to stay focused on the team. We can only do it as a team.

“When you play a season like this one it’s very easy to fall apart but we showed we are still together. We will see, there are five games to go. Let’s finish the season in a good way and analyse it later.”

Spurs manager Jose Mourinho was delighted to see his players voicing their frustration with each other on the pitch.

“That’s beautiful,” he told Sky Sports “It’s probably as a consequence of our meetings, so if you want to blame someone blame me.

“I asked them to demand more from each other and put colleagues under pressure. It was the situation of the first half where an amazing kid, a team boy like Sonny, that the captain thought ‘you have to do more’.

“I don’t know if there was any push or more, but it’s something important for a team to grow up. I was really pleased. I had no doubt in the second half they would stick together until the end.”

Toffees boss Carlo Ancelotti said: “We could compete better, yes. We lost a lot of second balls. But we were in the game until the end, we were a little bit unlucky. The dream is still there to go to Europe.”