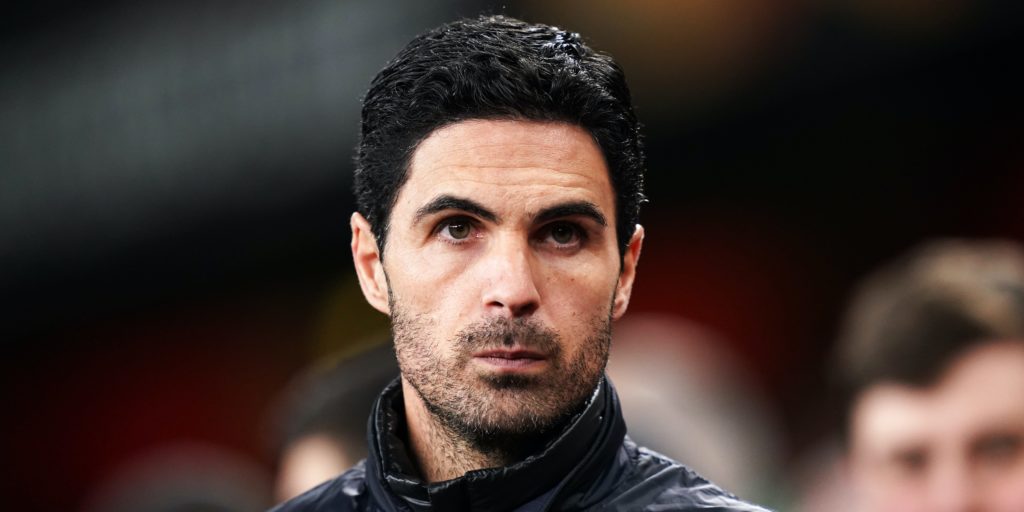 The Arsenal boss felt Vardy should have seen red in the first half.

Arsenal head coach Mikel Arteta bemoaned the decision to send off Eddie Nketiah but not Jamie Vardy as the Leicester striker struck late to salvage a point at the Emirates Stadium.

The Gunners looked on course for a fourth straight Premier League win after Pierre-Emerick Aubameyang opened the scoring and the home side then created a string of chances to kill off the game.

Instead they had to settle for a 1-1 draw as Vardy scored with six minutes remaining, soon after Arsenal had been reduced to 10 men following the dismissal of Nketiah.

The Arsenal forward had only been on the pitch for a matter of four minutes when referee Chris Kavanagh showed him a red after reviewing a foul on James Justin using his pitchside monitor.

Arteta was unhappy that Vardy was even on the pitch to earn a share of the spoils after he caught Arsenal defender Shkodran Mustafi with a stray boot late in the first period.

“I have my opinion, I prefer to keep it like this,” he said.

“What I am saying is if you review incidents of that type you should review them all.

Arteta revealed Nketiah had apologised to his team-mates and that he now expected the dressing room to rally round the England Under-21 international.

“He is disappointed. He said sorry. He doesn’t need to do that,” added Arteta.

“I know when he goes for every single ball it is because he is so willing to win every challenge. He is on the front foot in every action.

“He didn’t see the player coming and obviously he doesn’t want to hurt anybody. It is part of the process. They are really young. They need to learn from this situation and hopefully it won’t happen again.

“Absolutely, I think we are going to have to support him. There are few things that happened which is why we didn’t end up winning the game. It is not just that action.”

Leicester boss Brendan Rodgers would not be drawn on Arteta’s assessment and praised referee Kavanagh for consulting his pitchside monitor before dismissing Nketiah.

“To be honest I can’t even remember that one,” he said of Vardy’s coming together with Mustafi.

“I haven’t seen it to be honest, I didn’t even think about looking at it afterwards.

“Obviously, Mikel will have his feelings of it but like I said with Eddie, it wasn’t intentional but dangerous to go in on the stretch with his studs up.

“I think when you see it like he (Kavanagh) has, it was a clear red. The kid is just stretching but it ended up being an horrific challenge so was absolutely deserving for a red card.”