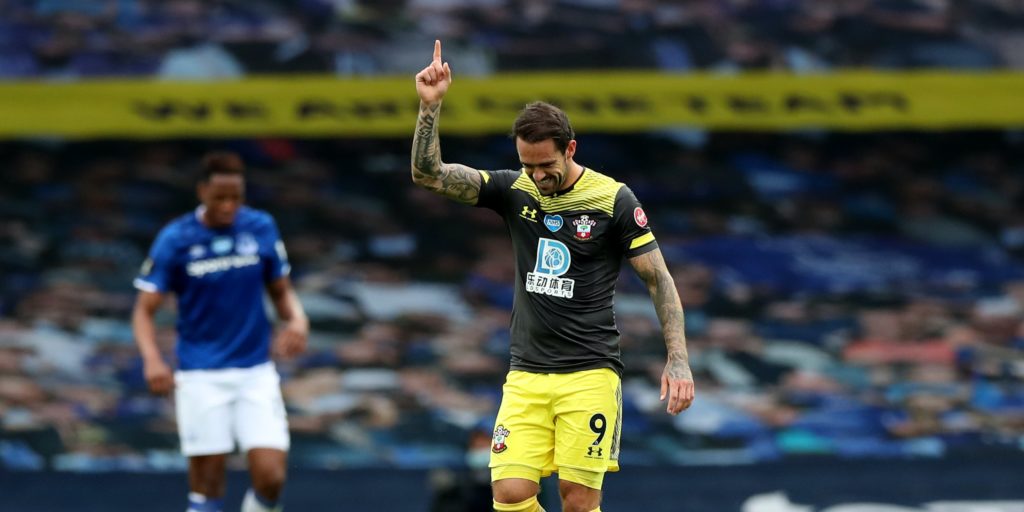 Richarlison scored for Everton just before the break to cancel out Ings’ opener.

Danny Ings kept himself well and truly in the running to win the Golden Boot with his 19th Premier League goal of the season but Southampton had to settle for a 1-1 draw against Everton at Goodison Park.

The 27-year-old was comfortably the best player on the pitch, showing great movement and predatory instinct and it was precisely that which moved him within three goals of Leicester’s Jamie Vardy at the top of the goalscoring charts.

Ings highlighted his ability to seize a chance when it comes his way with a real poacher’s goal, playing on the shoulder of the last defender and benefiting when a mishit shot from Stuart Armstrong fell at his feet.

The former Liverpool and Burnley striker was denied a major tournament debut with England at Euro 2020 this summer due to the coronavirus pandemic but his current form surely makes it impossible for Gareth Southgate to ignore him in future selections.

That his goal was not enough to take all three points was partly down to luck – he had a header hit the crossbar and James Ward-Prowse missed a penalty with the score still at 0-0 – and a well-taken Richarlison goal out of nowhere which sparked an improved second-half display from Everton.

The result did nothing for either mid-tabled side’s faint European hopes, with Toffees manager Carlo Ancelotti admitting they had to win their three home matches to stand a chance.

They were not given much opportunity in the first half as Southampton, with more away victories than any other team outside the top three, set about extending that record by pressing high and hard.

Ancelotti had made a change to the criticised midfield of Monday’s defeat at Tottenham, with academy graduate Anthony Gordon replacing Gylfi Sigurdsson – the one player singled out for extra scrutiny against Spurs – and the youngster responded by being Everton’s best player in the opening 45 minutes.

The bar was set low, though – the hosts were dreadful as they were once again dominated in midfield and panicked in defence with a lively Ings running rings around them.

Armstrong hooked home from an offside position to give Everton an early scare but with Oriel Romeu and Ward-Prowse bossing the middle there was a lot more pressure to absorb.

Not only were Saints harder working and more determined, they passed the ball better, with one or two intricate and incisive moves leaving their opponents chasing shadows.

After Alex Iwobi had forced Alex McCarthy into the first save from a rare Everton chance, the game burst into life with Ward-Prowse’s free-kick tipped over and Ings’ near-post flick-on hitting the crossbar.

The bar came to Everton’s rescue again seconds later when Ward-Prowse sent Jordan Pickford the wrong way from the penalty spot after the midfielder was fouled by Andre Gomes.

Ings was not to be denied, however, and pounced when the ball somewhat fortuitously fell to him, holding off Pickford to scuff home.

Just before half-time Everton’s midfield issues got worse when Gomes went off injured, to be replaced by Sigurdsson.

But out of nowhere the hosts equalised when Lucas Digne’s long diagonal out of defence was controlled with one touch by Richarlison and hammered past McCarthy with the second, equalling his best tally of 14 in all competitions.

Ancelotti’s decision to replace right-sided midfielder Iwobi with defender Djibril Sidibe at half-time had the desired effect of giving Everton more solidity and their performance improved as a result.

Dominic Calvert-Lewin, who has not scored in nine matches and was quiet again, fluffed his one chance when he failed to connect properly with Tom Davies’ diagonal pass with only McCarthy to beat.

Richarlison, having run from halfway, felt he was denied a goalscoring opportunity by Jan Bednarek but referee Lee Mason decided the foul warranted only a yellow card and ]VAR agreed – much to the Everton coaching staff’s disgust – and with it went the last real chance of the game.