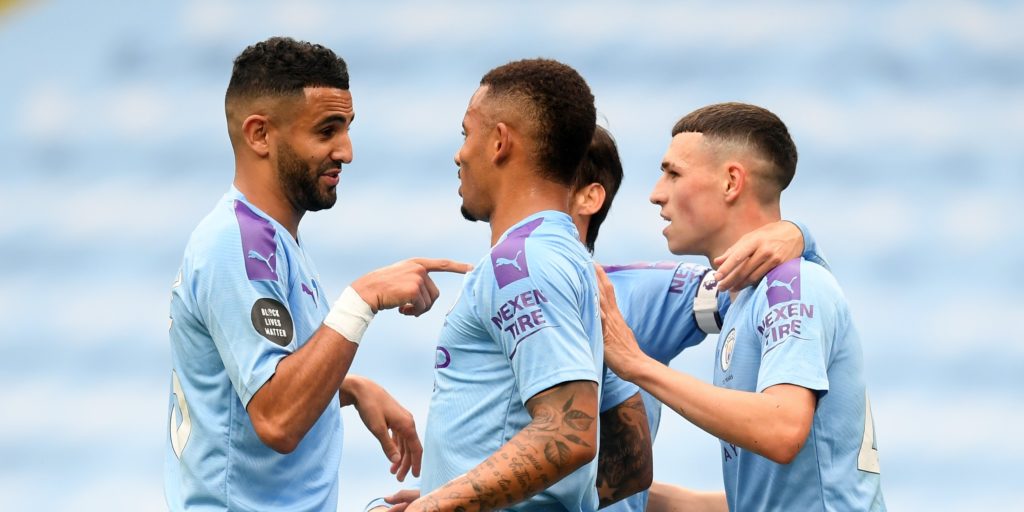 Riyad Mahrez hailed Manchester City’s goalscoring power after Newcastle were swept aside at the Etihad Stadium.

The Algeria international was himself on target as City cruised to a 5-0 win in the Premier League on Wednesday.

The rout took City’s goal tally in the Premier League this season to 86 from 34 games – 11 more than champions Liverpool, who they hammered 4-0 last week – while Mahrez’s goal also made a mark in the record books.

Mahrez’s 21st- minute strike was his 10th of the campaign, joining Sergio Aguero (16), Raheem Sterling (14), Kevin De Bruyne and Gabriel Jesus (both 11) in double figures. It is the first time in the history of the competition one club has had five players reach 10.

Mahrez said: “That’s our team – (we know) that everyone can score. Everyone has the quality to score.

“For me I want to try to help the team and score the most goals that I can.

“It’s not easy but we made it easy by scoring early in the game and after we had more control and could try to score more goals.”

The result was never in doubt after Jesus opened the scoring in the 10th minute, turning in a low cross from the irrepressible David Silva. Mahrez added the second before Fernandez deflected an attempted clearance from Matt Ritchie into his own net.

Silva, who is leaving the club at the end of the season after decade’s outstanding service, then took over. The Spaniard clipped in a superb free-kick on 65 minutes and then played in Sterling to complete the scoring in injury time.

It was an emphatic return to winning ways after Sunday’s surprise loss at Southampton.

Mahrez said: “I think we played good (at Southampton) but we missed a lot of chances. Here we scored – that’s the difference.

“We need to keep it up and keep working to help the team to improve and we arrive in the best form in the important games.”

Newcastle, without some key players due to injuries, offered little in the one-sided encounter and defender Danny Rose felt they made it too easy for the hosts.

“It is not very nice, considering the run we have been on,” Rose told NUFC TV: “We have played some good football, kept clean sheets and defended well, so this is difficult to take as Man City didn’t have to work hard to score the first couple.

“We could have defended better. City didn’t have to produce a lot of magic. We know they are one of the best teams in Europe but we should have made it harder for them to score.”