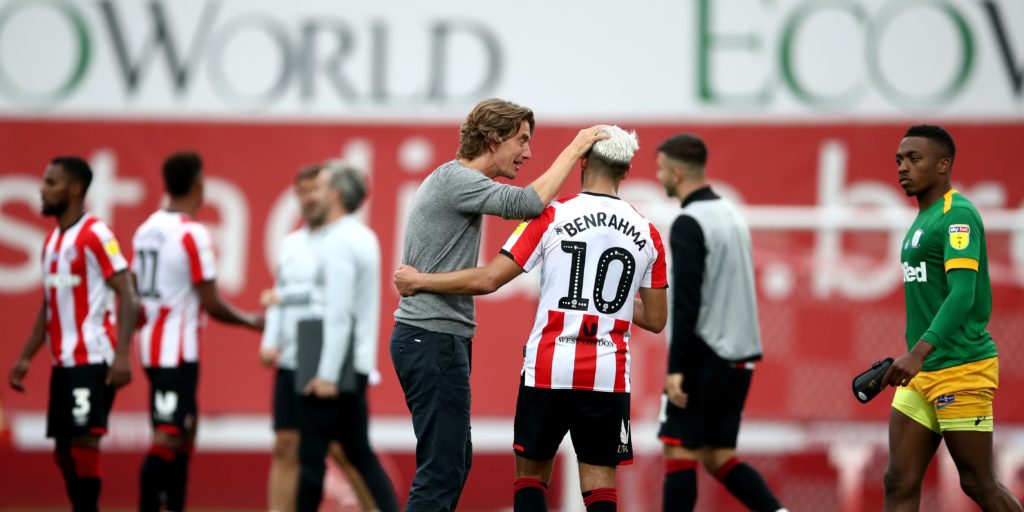 Leeds and West Brom are looking over their shoulder.

Brentford moved to within a point of the Championship automatic-promotion places after a 1-0 home win over Preston.

Ollie Watkins scored the only goal of the game after just four minutes as the Bees continued to heap pressure on second-placed West Brom.

After being played through by Emiliano Marcondes, Watkins took a touch before firing past goalkeeper Declan Rudd for his 25th goal of the season to move ahead of Fulham striker Aleksandar Mitrovic in the Golden Boot race.

Brentford held on to maintain their flawless record since the resumption in June, equalling a club record of eight successive league wins in the same season in what could be their penultimate match at Griffin Park, the club’s home since 1904.

At the other end of the table, Stoke inched towards safety with a 1-1 draw at Bristol City.

Danny Batth’s second-half header gave Stoke a share of the points their endeavour deserved after Filip Benkovic, another central defender showing the finishing instincts of a striker, had given the Robins the lead just before the break.

Victory would have almost secured Stoke’s Championship status and, though a draw leaves them with some work to do, manager Michael O’Neill will be confident they can finish the job now they are five points above the relegation zone.

It looked like Macauley Bonne’s 58th-minute goal would see the Addicks move four points above the drop zone but Jutkiewicz struck in the third minute of added time and the visitors had to settle for a two-point cushion above the bottom three.

It was also a much-needed point for Blues, who are now five points clear of the drop zone after halting a four-match losing run.

Sammy Ameobi scored twice to leave Nottingham Forest with one foot in the play-offs and Swansea’s top-six hopes looking rather more slender following a 2-2 draw at the City Ground.

The Reds winger netted from the edge of the box in spectacular fashion in both halves, to cancel out a fine strike from Rhian Brewster and a controversial penalty from Andre Ayew.

It left Sabri Lamouchi’s side sitting in fifth, five points clear of seventh-placed Millwall, with two games to play, while Steve Cooper’s Swans are a point behind the Lions in eighth, with Welsh rivals Cardiff currently holding on to the final play-off spot.