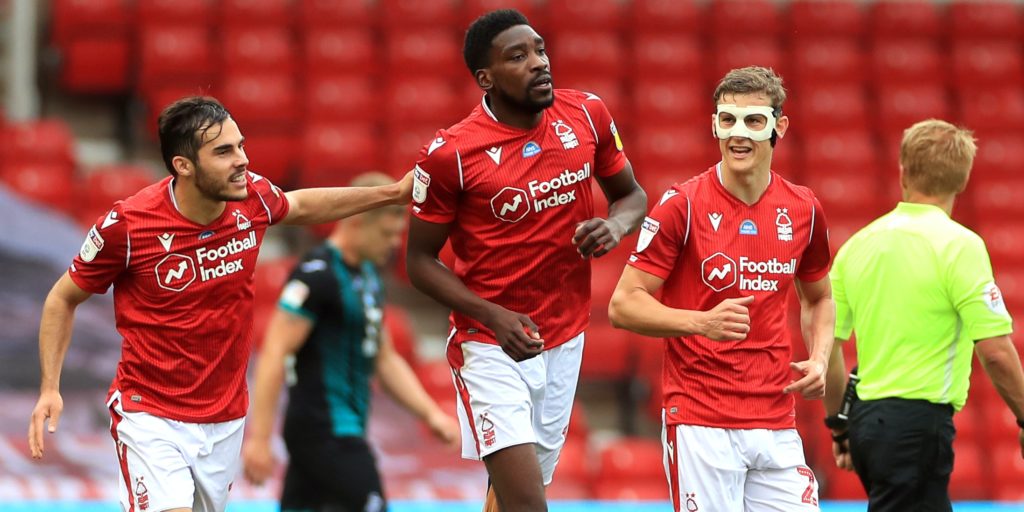 The Reds are in fifth spot in the Championship following a 2-2 draw.

Sammy Ameobi netted twice to leave Nottingham Forest with one foot in the Sky Bet Championship play-offs and Swansea’s hopes looking rather slimmer following a 2-2 draw at the City Ground.

The Reds winger netted from the edge of the box in spectacular fashion in both halves, to cancel out a fine strike from Rhian Brewster and a controversial penalty by Andre Ayew.

It left Sabri Lamouchi’s side sitting in fifth place, five points clear of seventh-placed Millwall, with two games to play – while Steve Cooper’s Swans sit a point behind Millwall in eighth, with Welsh rivals Cardiff currently holding on to sixth position.

Swansea should have taken the lead when Ayew planted a header wide, while Connor Roberts also came close with a low, driven shot that found the side netting.

So it was not a shock when their bright start ended with the visitors taking an eighth-minute lead. Jake Bidwell whipped in a low cross from the left side to pick out Brewster, who swept home an unstoppable finish from 10 yards.

It was no more than Swansea deserved with Forest having looked tentative and uncertain.

But the home side did eventually spring into life in the 20th minute when they equalised in spectacular fashion.

It was Forest’s first meaningful effort on goal when Yuri Ribeiro fed the ball to Ameobi several yards outside the box. The former Bolton man surged forward a few strides before curling a precise, spectacular finish beyond the reach of keeper Erwin Mulder and inside the upright.

Forest were growing into the game and a probing run down the right side from Lewis Grabban ended with a ball cut back across the face of goal that Swansea eventually cleared.

Forest’s Tobias Figueiredo was then booked for a robust challenge, right on the edge of the box, on Bidwell.

After Ameobi had been inches away from scoring a second for Forest with an angled shot, another challenge right on the edge of the opposite box – and again seemingly just outside – resulted in a penalty for Swansea in the final minute of the first half.

Ryan Yates clipped Ayew, referee Oliver Langford pointed to the spot and the forward regained his feet to lift the ball to the right of Brice Samba, who had dived to his left, and Swansea had the lead at the interval.

Forest levelled again 10 minutes into the second half when Ameobi conjured up another cracker. After being fed the ball by Carl Jenkinson on the right side, Ameobi cut inside Bidwell, powered towards the edge of the box and found the bottom corner with a precise, driven shot.

When Bidwell delivered into the box again Ayew looked poised to put Swansea ahead for a third time, but Ribeiro and Samba managed to block between them.

Swansea found themselves down to 10 men when Naughton launched into a bad challenge on substitute Alex Mighten, to earn an instant red card in the 82nd minute.