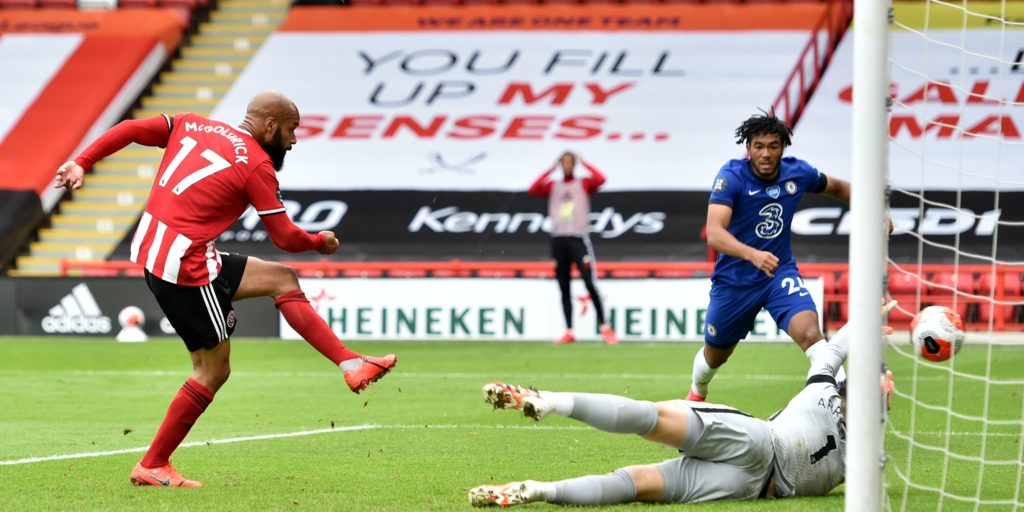 The forward scored twice in Sheffield United’s victory over Chelsea.

Chris Wilder has paid tribute to David McGoldrick after the striker finally broke his Premier League goal drought in Saturday’s 3-0 win against Chelsea.

McGoldrick scored his first top-flight goal in 26 appearances this season when turning home a rebound to give the Blades a first-half lead.

It was the former Nottingham Forest and Ipswich forward’s first league goal since April 2019, when he scored twice in a 3-0 win at Hull.

McGoldrick grabbed his second against Chelsea after Oli McBurnie had made it 2-0 at half-time to seal another memorable win for the Blades.

Wilder said: “The attitude he brings, his work ethic. To be fans’ favourite at this football club you’ve got to tick a lot of boxes.

“You’ve got to work hard, which he certainly does, and to play centre-forward for Sheffield United you have to have some ability, and he certainly has.

“The way he’s come through this period this season without scoring and still been right up there in people’s thoughts and how they respect him and what we all think about him, just shows what he’s all about.

“He deserves every reward because it’s been a difficult little period, but for us to pick him, he has to bring something to the team and for him to get two goals is brilliant for David.”

Wilder’s side had already beaten top-six rivals Tottenham and Wolves this month before Saturday’s victory gave their Europa League hopes another big boost.

“We had to follow that up again,” Wilder added. “Every manager doesn’t want a spike team, a yo-yo team with one good performance and then a bad one.

“It’s been a great week. Tough game at Burnley (1-1 draw), great result midweek (against Wolves) and to follow it up with another good result against Chelsea is great for everybody.”

Chelsea boss Frank Lampard was furious with his side’s display at Bramall Lane, which has left their Champions League bid hanging in the balance.

The Blues could slip out of the top four on Monday if both Leicester and Manchester United win their games in hand.

Captain Cesar Azpilicueta acknowledged his side’s defensive frailties and admitted conceding sloppy goals had been a problem all season.

The Spaniard told Chelsea’s official website: “Obviously when we concede the goals that we have conceded, it is difficult and something that is a big issue we are having through the season.

“We are conceding a lot of goals, and it is like against Crystal Palace you have to score three goals to win the game and this time we were not even able to score one.”

Azpilicueta also admitted his side failed to match the Blades’ physicality, adding: “It was more about the desire, about the determination.

“They were always ahead of us, that they were more determined than us, always they put the toe in before us.”