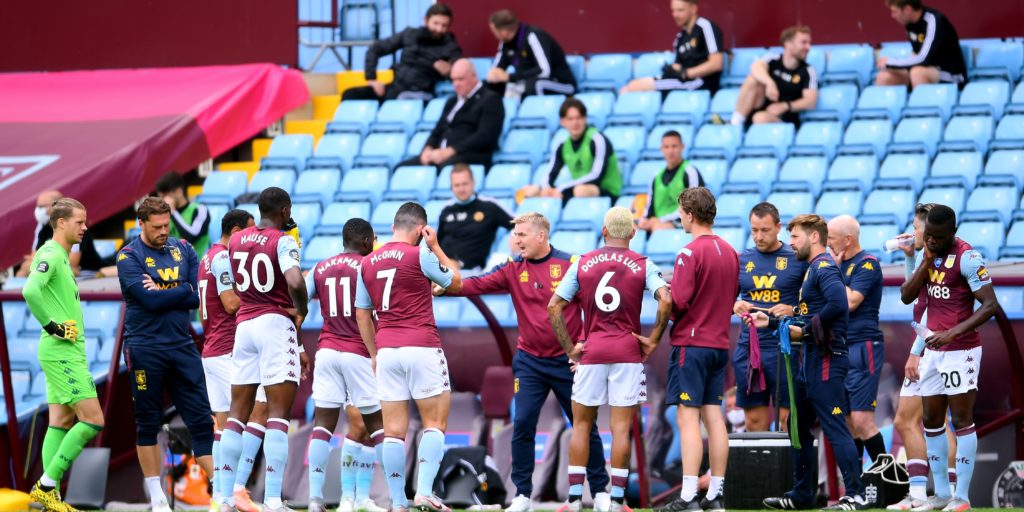 Smith was pleased with the chances they created against Liverpool and Manchester United.

Aston Villa manager Dean Smith has called on his players to have belief they can turnaround their fortunes during the final four matches of their Premier League season.

Villa are second from bottom ahead of Sunday’s home fixture with Crystal Palace and without a victory since football resumed.

A 3-0 defeat to Manchester United on Thursday was their third loss in a row, but Smith has told his squad to forget about those results and be positive in order to prevent an instant return to the Sky Bet Championship.

“Everybody is hurting, but we have to move on very quickly,” he said in quotes reported on the club’s official website.

“We have to go into these games believing that we can win every single one of them.

“The heart and the spirit are there, and we have to make sure that we maintain that. We are fighting for our lives, the players know what it means and they know what is at stake.

“I’ve been in situations like this before, Aston Villa is my life at the moment and we’re doing everything we can.”

After the visit of Palace, Smith’s side head to Everton before Arsenal travel to the Midlands for the penultimate match of the campaign.

The final day will see Villa take on relegation rivals West Ham at the London Stadium, but they have to ensure they are still in with a chance of survival by the time that July 26 date comes around.

Smith added: “We have to be better, but we created chances against two of the top teams.

“The lads showed great belief and character against Liverpool and Manchester United and if a decision went our way, it would’ve been close against United.

“We know how important these last four games are for our season. We know that this is a run where we can be more competitive.”

While Villa have lost their last three, Sunday’s opponents Palace have suffered four defeats in a row since a 2-0 win at Bournemouth last month.

Eagles boss Roy Hodgson rejected claims they are on their holidays ahead of this weekend and Smith is full of respect for his fellow manager.

“I expect a well-organised team and defensively we have to be good because we know the threat that they pose,” the 49-year-old said.

“I have every respect for the job that Roy Hodgson has done. They were unfortunate to lose against Chelsea and Roy will make sure that they don’t take their foot off the gas.”

Villa goalkeeper Pepe Reina is expected to be fit despite complaining of a hamstring injury during the loss to Man United, while Matt Targett should return after missing the last two matches with the same problem.