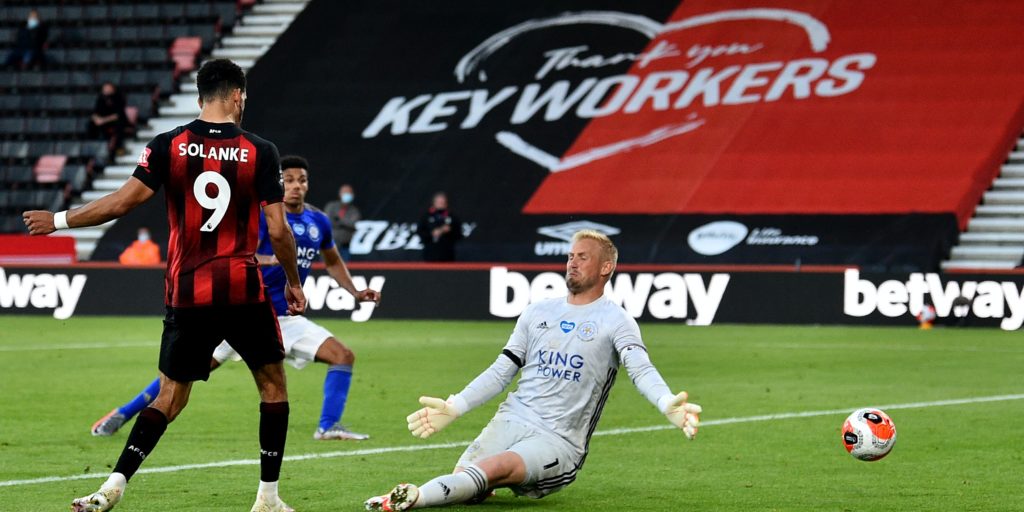 The 22-year-old had gone 38 top-flight appearances without finding the net before his double against Leicester.

Dominic Solanke hopes to fire Bournemouth to a Premier League great escape after picking an opportune moment to end his lengthy goal drought.

Striker Solanke hit a crucial second-half brace as the relegation-threatened Cherries battled back to thrash Champions League-chasing Leicester 4-1 and breathe fresh life into their survival bid.

The 22-year-old had gone 38 top-flight appearances without finding the net since a reported GBP 19million transfer from Liverpool in January 2019.

Solanke, capped once by England in 2017, admits his prolonged period without scoring was an unpleasant experience and is eager to add to his tally and help Eddie Howe’s men defy the odds.

“It was probably the best time for them to come,” said Solanke.

“The first one was to take the lead so that was a big emotion. To go on and get the second one was a delight for me.

“I think the position we are in at the moment isn’t great but the past few games we have been building up.

“If you look at the history of the club, we’ve beaten the odds a lot of times and hopefully we can do it again.

“It’s been quite difficult for us recently but (Sunday) was a big boost.

“It hasn’t been nice (personally) but it’s good to get the goals. Hopefully I can take that confidence and get a few more.”

Bournemouth moved to within three points of safety by stunning the Foxes, although they have a worse goal difference than relegation rivals Watford and West Ham.

The Cherries travel to Premier League runners-up Manchester City on Wednesday before a home game against south-coast rivals Southampton and a trip to Everton on the final day of the season.

“We know it’s not going to be easy, especially with a team like Man City next but we need every point we can get at the moment,” said Solanke, whose previous Premier League goal came when Liverpool beat Brighton 4-0 in May 2018.

“Obviously the fans can’t be here to witness it at the moment but they can watch at home on TV.

“Hopefully they watched, were happy with the result and in the last few games we can kick on and stay in the Premier League.”