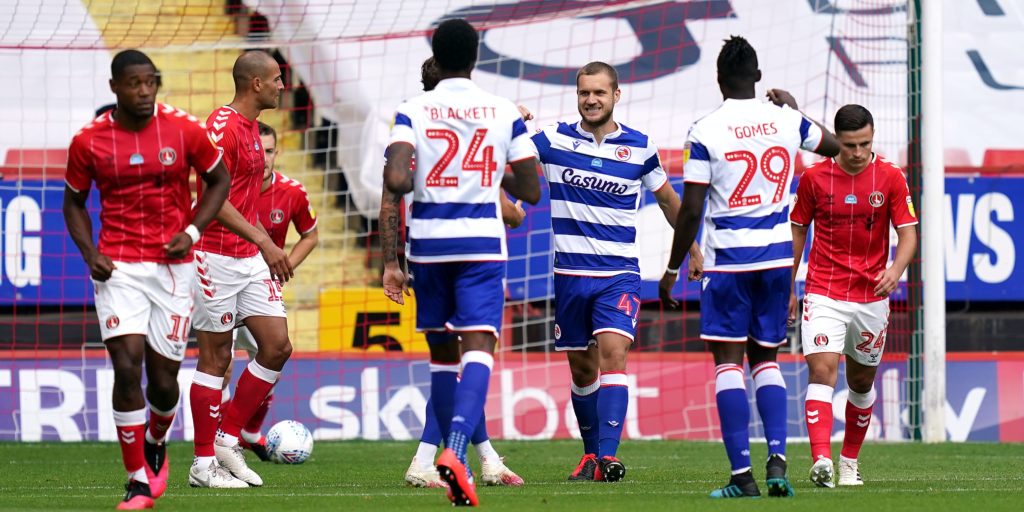 George Puscas scored the only goal of the game for Reading

Romania forward Puscas slotted home from the spot just three minutes in, for his 13th goal of the campaign.

And that strike proved enough for the Royals to claim a second win in three matches, leaving Charlton frustrated with their lack of cutting edge.

Chuks Aneke thought he had tapped home a first-half equaliser for the Addicks, but his effort was ruled out for offside.

The 27-year-old’s barren scoring run has now stretched to 18 games and, despite another wholehearted effort, the ex-Arsenal trainee certainly appears short on confidence.

While Reading will be left to coast out the season in mid-table comfort, Charlton’s fourth match without a win has Lee Bowyer’s men still fretting for their safety.

Reading had the lead before Charlton had even settled.

Rinomhota wriggled free smartly on the inside left, only to miscue his cross.

Meite should have doubled Reading’s advantage when steaming onto a corner, but he failed to connect properly and instead thudded a weak header into the ground.

The 24-year-old quickly went closer with another header but this time his effort drifted just wide.

The visitors could easily have paid for that profligacy, but the offside flag saved them instead.

Aiden McGeady whipped a low effort on goal from 20 yards that proved sufficiently stinging that Rafael could only parry the ball back into the box.

But when Aneke tapped home up popped the flag, and the strike was chalked off.

Macualey Bonne then tapped just wide from a smart McGeady cross, but Charlton failed to force a breakthrough, leaving Reading leading 1-0 at the break.

The Addicks seized control again after half-time but, despite sustaining impressive approach play, the hosts could not locate any killer instinct.

Alfie Doughty sneaked round the back to deliver a fine cross, but the onrushing Darren Pratley just failed to connect.

And when Aneke headed high and wide after working into space at the back post from a corner, Charlton started to realise this was not to be their day.

To add insult to injury for the hosts, Jake Forster-Caskey was booked for diving late on, when the Addicks thought he deserved a penalty instead.