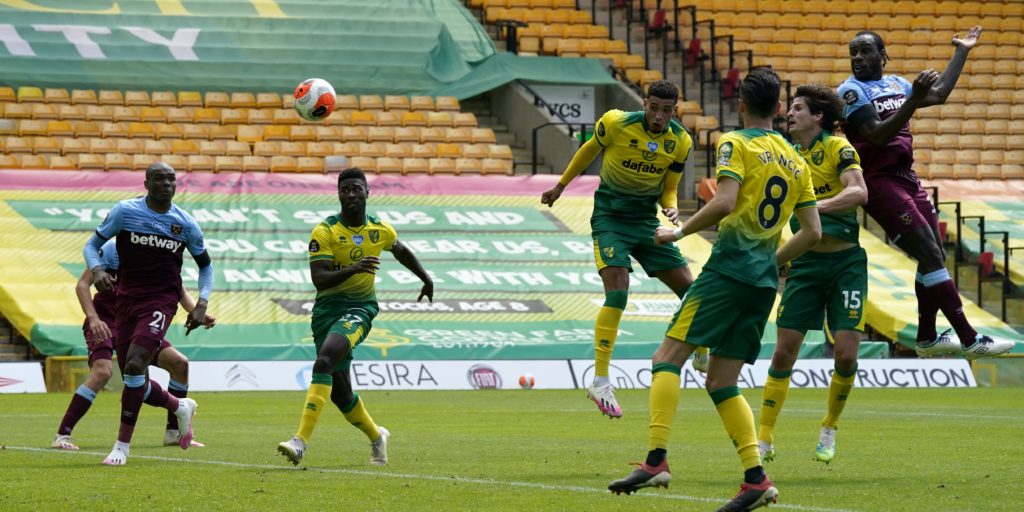 The Canaries’ one-year stay in the top flight is over following another below-par performance at Carrow Road.

Norwich have been relegated from the Premier League after a resounding 4-0 defeat to West Ham at Carrow Road.

Michail Antonio’s four goals sealed the Canaries’ fate, as Daniel Farke’s side became the first team to lose their top-flight status this season.

Six successive league defeats have now followed, to extend the losing run to seven in total, in which time last season’s Sky Bet Championship winners have only managed to score once.

Antonio’s two goals in the first half put an end to Norwich’s already slim hopes of survival, but West Ham’s emphatic victory was sealed when he struck twice more in the second period to become the first Hammers player to net four in a Premier League game.

Norwich had needed their first win in the league since February to avoid relegation, but fell short from the start against the London club who were 10 points better off than the Canaries at the start of the game.

The Canaries started brightly, with some good movement in and around the West Ham box, but without threatening goalkeeper Lukasz Fabianski.

However, it took less than 10 minutes for the Hammers to make Norwich’s difficult task even harder, when Antonio fired the ball past Tim Krul from close range to give the visitors the lead.

The hosts fought back and tried to level the score, with Teemu Pukki heading wide from a Jamal Lewis cross just before the first-half drinks break.

Farke’s men had periods of attacking play but were unable to threaten the goal, Mario Vrancic had another chance from a free-kick just outside the box, but his effort sailed over Fabianski’s bar.

Krul kept his side’s hopes of a win alive towards the end of the first half with a flying save to deny Tomas Soucek’s first-time volley.

Just before the stroke of half-time, though, Antonio added his second of the match, the 30-year-old heading home a Mark Noble free-kick.

In the second half, Antonio was almost denied by Krul, but the ball looped up and the West Ham star was able to head in the rebound for his fifth goal since the Premier League restart.

Following the second drinks break, Ryan Fredericks went past Lukas Rupp before finding Antonio, who scored from close range to complete the rout.