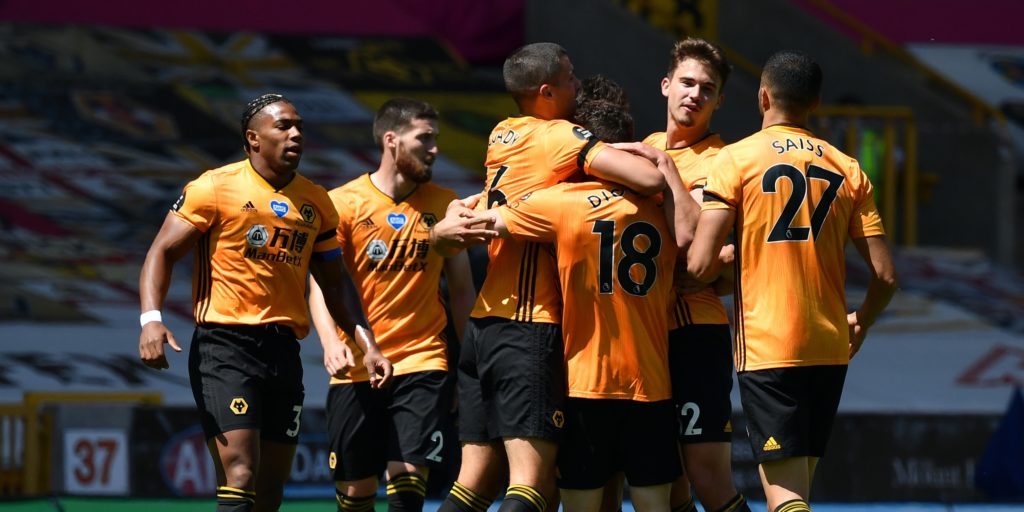 Wolves moved back up to sixth after their 3-0 win.

Furious boss Carlo Ancelotti rounded on his Everton flops after they slumped to a limp defeat at Wolves.

Raul Jimenez’s penalty and second-half goals from Leander Dendoncker and Diogo Jota earned a comfortable 3-0 victory for the hosts.

The Toffees remain 11th in the Premier League having won two of their last nine games and with little hope of making a late push for Europe.

An exasperated Ancelotti said: “It was a really frustrating day and performance. The spirit of the team was unacceptable.

“There are some excuses but I don’t want to have excuses, the performance was not acceptable. I spoke to the players and we have to prepare and work differently and have a different attitude.

“I don’t want to talk individually about every single player. I said to them this attitude is not acceptable for me and we have to change immediately. I want to see a different spirit.

“If I have to be honest, in some games the spirit was really good. Liverpool, Norwich, Leicester. It’s difficult to accept for this reason because this team has a fighting spirit.”

Boss Nuno Espirito Santo has less than a year left on his current contract and denied reports he was close to signing a new deal.

He said: “It’s not true, I still have one more year of contract. I have seen the stories.”

Wolves hit back from successive defeats to Arsenal and Sheffield United – the two teams directly below them – and are now three points behind fifth-placed Manchester United.

Jimenez opened the scoring from the spot in first-half stoppage time – grabbing his 25th goal of the season – when Lucas Digne fouled Daniel Podence.

Dendoncker made it 2-0 46 seconds after the restart when he glanced in Pedro Neto’s free-kick and Jota sealed the points, drilling in past Jordan Pickford from Ruben Neves’ wonderful pass.

Adama Traore should have made it four but hit the crossbar from six yards late on.

“You are in pain (after a defeat) but you stand up the next morning and you have to go again. That is the game.” said Nuno.

“We had a lot of actions today and didn’t concede too many chances, it’s always about trying to upgrade and raise the standards.

“It was not our main objective (keeping in touch with the top four), there were things we should improve.

“It’s not about that, it’s about trying to create and raise standards so we become a better team.

“Our finishes were not so good, look at the chances we had. Adama is not going to have an easier one.”