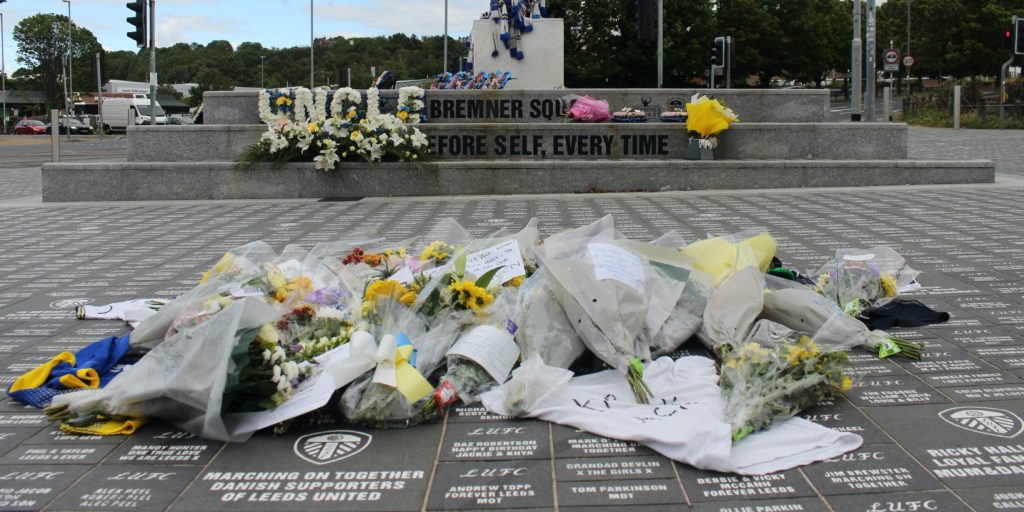 Charlton, who was a part of England’s 1966 World Cup success, died on Friday aged 85.

Flowers, scarves and football shirts were laid around Charlton’s personalised floor tile outside the stadium of the club he represented throughout his 21-year playing career.

Leeds fan Sam Breen, 22, travelled from Bradford to pay his respects and leave a bouquet of flowers.

He said: “Big Jack meant a lot to the club and the city of Leeds, the only club he played for was Leeds. It’s obviously a loss for the club, tragic, with the loss of Trevor Cherry and Norman Hunter this year too, he was a World Cup winner and a Leeds legend.

“Obviously I didn’t know the guy personally but everyone said he was such a lovely gentleman so may he rest in peace, he meant a lot to everyone.”

Michael Normanton, co-editor of Leeds fanzine The Square Ball, said: “Jack bridged the gap between the old Leeds, a side that once contained John Charles and not much else, and Don Revie’s legends.

“Pushed to levels he had never imagined possible, Jack will always be remembered as one of the greats, notching up a number of appearances that will probably never be surpassed.

“With the loss of Norman Hunter and Trevor Cherry so fresh in our minds, Jack’s death is a further reminder that we need to cherish the Revie boys that remain.”

Mr Scargill told the Morning Star: “I am deeply saddened to learn of the death of Jack Charlton, who I knew as a friend and neighbour in Worsbrough where he lived for a number of years.”

He added: “Jack Charlton was one of the greatest footballers Leeds United and England have ever had but his support, together with Leeds United manager Brian Clough, for members of the NUM in 1984-85 earned him the respect of all miners and women miners’ support groups, who called him a hero.”

Among tributes left at Elland Road was a bouquet signed from the Leeds United Supporters Trust, members and all fans, which simply read: “RIP Big Jack. MOT (Marching On Together) forever.”

Another from Emma and Freddie Burnell said: “Jack, a true legend, a real gent. RIP.”

And flowers signed from Billy and Taddy Whites carried the message: “Big Jack. Thank you for all at Leeds United you did. A true gent who will be missed by many. RIP.”

On social media, a number of fans called for a lasting tribute at the stadium.

Twitter user @LUFCalypso said: “Would love to see a statue for Trevor Cherry, Jack Charlton and Norman Hunter built somewhere outside Elland Road. 1,568 appearances, numerous trophies and other notable appearances between them should never be forgotten.”

And @paudi_lufc wrote on Twitter: “Big Jack was always going to get honoured at Elland Road. Jack Charlton East Stand most likely. Just wish they’d honour these legends when they are around to see it, so that they can appreciate the legacy they’ve left behind at Leeds United.”