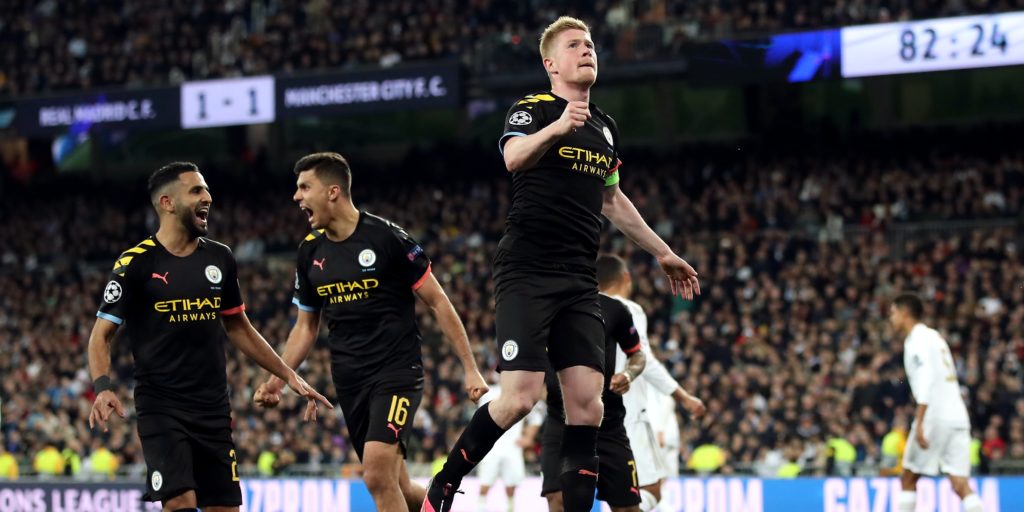 City hold a slender 2-1 lead from the first leg of the last-16 fixture.

There will be little margin for error when Manchester City and Real Madrid finally get to complete their delayed Champions League tie at the Etihad Stadium, according to former Spain midfielder Gaizka Mendieta.

City hold a slender 2-1 lead after they won the first leg of the last-16 fixture in Madrid on February 26.

The second leg, which had been due to take place in March, was postponed but European competition is set to resume again in August, with the remaining games to be completed ahead of a mini-tournament in Portugal from the quarter-finals onwards.

Pep Guardiola’s side may have seen their Premier League title passed on to Liverpool following the restart – but City continue to impress, winning both of their previous domestic games 5-0, while they are also out to retain the FA Cup.

Real Madrid, meanwhile, have chalked off eight straight wins since football returned behind closed doors in Spain in June to keep themselves ahead of Barcelona in the championship race.

Mendieta, who was twice a runner-up in the Champions League final while at Valencia, feels neither side can afford to lose focus when attention turns away from completed domestic matters next month.

“Both leagues are a week apart in terms of starting after the lockdown, so will find very similar situations in terms of form and preparation,” Mendieta said on a LaLiga conference call.

“It is going to be really equal I think, but maybe the one (team) with more disadvantage could be (from) France because they have not had competition at all.

“I expect it to be very, very tight. It will be more like we have seen in LaLiga and in England, in terms of the way the teams have been competing. There is really a small margin of error for anyone.

“The substitutions have become very key, how you maintain the high tempo of the level of the players with being fresh and also to avoid future injury.

“It will be very, very tight, but I expect the LaLiga teams to step forward and make it into the next round, then on into the final – and you don’t know, there may be two (LaLiga teams) there.”

With domestic football in France having not resumed, Paris St Germain have faced a much longer wait to play again.

Former West Ham and Tottenham forward Frederic Kanoute believes PSG will be looking to make up for lost time when they finally get back into action against Atalanta in their European quarter-final tie, which is set to be played as a one-off fixture.

The former Mali international, who made more than 200 appearances with Sevilla and twice won the UEFA Cup, said: “The Premier League and LaLiga (teams) are going to be pretty similar because they have resumed their competition, but it will be interesting to see how PSG can cope.

“I think they are going to fire at 200 per cent when they start the Champions League.

“We are going to see whether it was an advantage to be keeping fit and (then) almost being tired by competing week in and week out, or whether (it was better) having more rest and focused only on the Champions League.

“We will see which of these two methods will give the more advantage and it is all going to be very interesting.”

:: Watch the title race between Real Madrid and Barcelona, the fight for European qualification and battle to avoid relegation exclusively on LaLigaTV. Sign up to LaLigaTV for GBP 5.99 per month. (Available on Sky channel 435, Virgin channel 554 or via Premier Player app.)