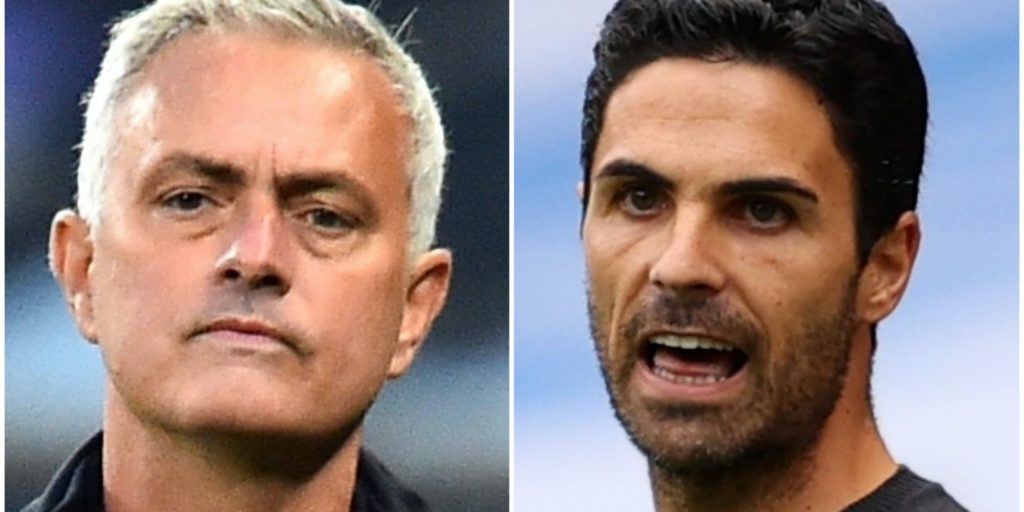 Arsenal make the short trip to face Tottenham on Sunday.

Jose Mourinho says he cannot wish Mikel Arteta success this season despite his affection for the Arsenal boss.

Mourinho comes up against a man who was with him at Barcelona way back in the 1990s in Sunday’s north London derby at Tottenham’s new stadium.

It is a game that will go a long way to deciding who will achieve Europa League qualification, so Mourinho is tempering the niceties.

“I met Mikel when he was a kid in Barcelona. I was there with Mr (Louis) Van Gaal. He was really, really a kid,” Mourinho said.

“When you know this kid at this age, time flies, but in the end you always look at them as the kid you have a great feeling for.

“When he became Pep’s (Guardiola) assistant I started calling him every time I met him ‘Mister’, not Mikel.

“I like him very, very much. I hope everything goes well for him in his career but in this moment he is in a rival club, a club that fights for the same thing we fight – a European position – and I cannot wish him good in this position.”

The pair may be at opposite ends of their managerial careers, but their current tasks across north London are pretty similar.

Both men took their job mid-season and are expected to build the club back into Champions League challengers after tough spells.

“The nature of his job is similar to mine, to Carlo (Ancelotti, Everton boss). You arrive in the middle of the season with a double focus, which is not easy,” added Mourinho.

“On one side you want to get results immediately, but on the other side you have an eye on the future.

“What you want is to build your own team, what you want is to start your next season. When you are in a relegation fight, for example Neil Warnock going there (Middlesbrough), he knows that he needs a certain number of points, he knows what he has to do.

“In our case it is different, because we are speaking about very important clubs, clubs that want to do better in the future. It’s half now, half in the future.

“We all are desperate to have the end of season, holiday, preparation, pre-season and start a new season. The reality is we have to fight for points, which means Europa qualification and a special rival feeling between Arsenal and Tottenham.”