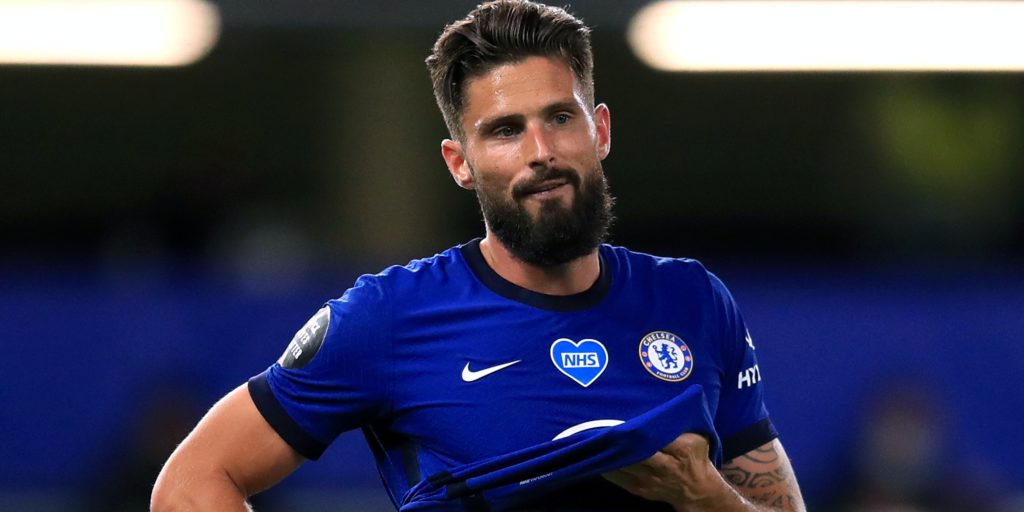 France international striker sees off Norwich and maintains the Blues’ top-three placing in the Premier League.

Olivier Giroud wasted a hat-trick of chances before heading Chelsea to a 1-0 home win over Norwich to boost the Blues’ Champions League qualification hopes.

Giroud nodded in Christian Pulisic’s teasing cross for his third goal in as many league starts, easing Chelsea’s lingering pain from Saturday’s 3-0 humbling at Sheffield United.

Leicester’s shock 4-1 hammering at Bournemouth and Manchester United’s 2-2 draw with Southampton had handed Frank Lampard’s men a double reprieve after their comprehensive loss at Bramall Lane.

The Blues had no business wasting such an unexpected opportunity to cement third place in the table against the already-relegated Canaries, and boss Lampard knew as much – making five changes from the weekend’s frustrating defeat.

For much of the first half both Chelsea and Giroud appeared to be heading for an agonising evening, but then the France hitman headed home and the entire mood around Stamford Bridge changed.

Chelsea now boast a four-point lead on both fourth-placed Leicester and United in fifth, though both those teams have an extra game left to play.

On another night Giroud could have had four, but in the end his solitary headed goal could wind up finally pushing the Blues into next term’s Champions League.

Ajax signing Hakim Ziyech was in the stands to watch his new team-mates, with the Morocco forward already training with the Blues ahead of being available for action next term.

The 27-year-old will doubtless have been impressed by USA forward Pulisic’s showing, and delighted with the result. The 32-cap assist king will be forgiven for also being excited by the improvements he can bring to the Blues next season however.

Right at the end of the first-half, Giroud put paid to a hugely frustrating 45 minutes.

The continually outstanding Pulisic had drifted onto the left wing, checked back onto his right foot – and delivered a sumptuous cross.

Giroud had precious little option other than to nod the Blues into the lead.

And how the Frenchman toasted that goal with relish, exchanging high fives and fist bumps with Jorginho. Because in everything that came his way before his goal, Giroud had botched, and in some style.

Ben Godfrey headed the ball straight into Giroud’s path in the area for the first of three gilt-edged chances, but the 33-year-old connected with his shin and the ball looped tamely into Tim Krul’s hands.

When Cesar Azpilicueta drilled a fine cutback, again it was Giroud racing onto the inviting chance. But here he could only hack high and wide into the deserted Shed End.

Timm Klose missed a regulation clearing header and the loose ball was once more right in Giroud’s path. But as with his first chance he could not find any kind of genuine connection, and Krul was able to scoop up and breathe easy.

Amid Giroud’s profligacy, Pulisic forced Krul to tip onto the bar with a fine snap shot on the spin.

When the breakthrough came, Chelsea’s relief was palpable however, and the hosts quickly carried that advantage into the break.

Giroud reverted back to spurning opportunities to open the second half, powering in on goal only to head high and wide from Willian’s threatening corner.

Toni Rudiger pulled off an inch-perfect last-ditch sliding tackle to deny the marauding Onel Hernandez in a rare Norwich attack.

Azpilicueta curled just over from the edge of the area as Chelsea threatened again, with alert Canaries keeper Krul then denying both Pulisic and Marcos Alonso.

Giroud just had time to turn a low cross the wrong side of the post before being replaced by Tammy Abraham in the closing stages. But with the crucial win in the bag, neither Giroud nor Chelsea will care too much about those missed chances.