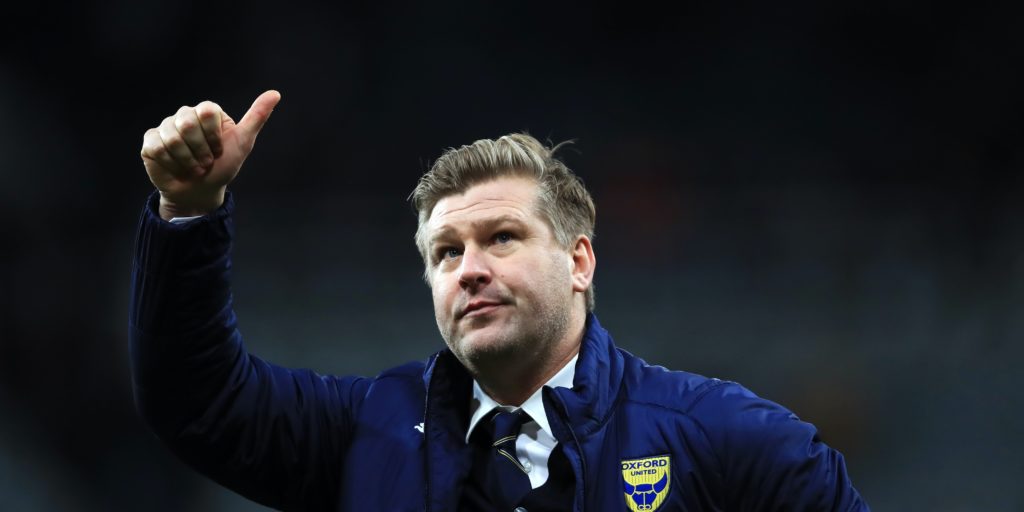 The U’s take on Wycombe in the Sky Bet League One play-off final on Monday evening.

Oxford have rejected the chance for a Wembley visit ahead of Monday’s Sky Bet League One play-off final.

Boss Karl Robinson has revealed he asked his players if they wanted a pre-match tour to get their bearings – and they said no.

The U’s will face Gareth Ainsworth’s Wycombe for a place in next season’s Championship, with Robinson insisting any match at the national stadium will be special, even behind closed doors.

“It’s something they preferred not to do,” said Robinson, of a possible pre-match Wembley visit.

“I don’t know whether Wycombe are going. If they do they may think we’re being arrogant by not going, but that’s certainly not the case.

“I just know that we feel when we turn up on Monday we’ll be ready and that’s the most important thing.

“Wembley’s always special and a place that creates memories, but the best time to use your phone is after the match.

“There’s no right way, there’s no wrong way; this was just the choice of my players.”

Asked if Wembley can retain its magic without the fans, Robinson continued: “It’s Wembley, I’ve cried there, as a fan I’ve enjoyed winning there.

“I’ve been there and won as a coach, and I’ve had many, many memories going there for different reasons. And it’s always special.

“I’m there three or four times a year probably for FA hearings, and it’s empty then.

“But even when you do park your car before an FA hearing, it’s still wonderful going to Wembley. There’s a buzz about the place.

“It’s what we are all about as a nation.

“It is the home of football. If you ever get bored with going to Wembley, even if there’s nobody there, then you don’t like football.

“Of course it’s a much better place full of people, supporting and cheering, but we’re really looking forward to this.”

As the coronavirus fallout continues to hit football, Robinson admits Oxford’s only chance of retaining all of their current top talents is to win on Monday and secure promotion.

“I’m immensely proud of all my players and they know what they mean to me,” said Robinson.

“It’s a relationship I have with all my players. There’s players at the top level who still phone me and ask things.

“And it’s purely because when players wear a shirt for a football club or play for me, and they show me the respect by the way they conduct themselves with each other, I’ll always be there for them throughout the course of their careers.

“This is a group of people I want to keep together for a long time.

“We’ve always sold players. I’ve never had a budget where I can build a team; I keep a team.

“And the only way we can keep this team, I hope, is by finding ourselves at the next level, where a lot of my players keep telling me every single week that’s where they deserve to be.

“So if you deserve to be there, get there wearing yellow.”